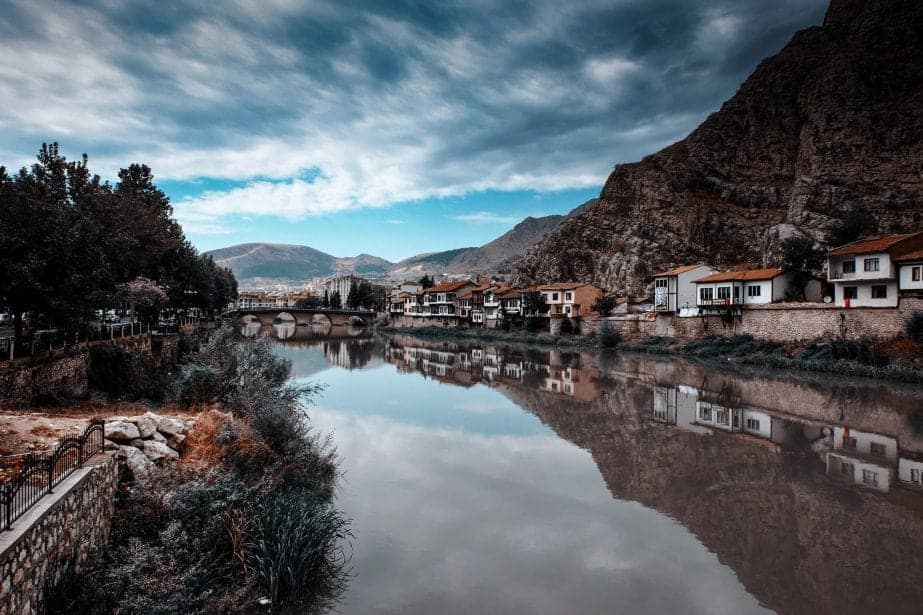 Turkey is an abundance for the senses.  The views, the food, the smells, everything about turkey is exquisite and that’s why it’s one of my favourite places in the world.

We are all familiar with Turkish delights, kebabs and Turkish rugs, but imagine being at the centre of all those delicious and beautiful things! But that’s not all that Turkey is famous for.  There are so many great places to visit in Turkey that this list could be never-ending but today I will tell you my favourite 10.

Here are the most beautiful places to visit in Turkey!

How to get to Turkey

Turkey is extremely accessible by international flight.  There are two airports in Istanbul so make sure you know which one you are flying in and out of as it could affect your trip.  One is very close to the city of Istanbul and one is an hour drive away!

Sabiha Gokcen Airport is the airport closest to the city.  This serves international and domestic flights.

Istanbul Ataturk Airport is the biggest airport but is an hour away from the city centre.  This serves most of the international flights.  So, when you leave Istanbul always check which airport, so you don’t get caught out.  I know of so many people that have missed their flight because they thought they were flying out of the closest airport but really, they were flying out of the other one!

Within Istanbul, there is plenty of transport options which include metro, train, buses, trams and ferries.

If you would like to travel throughout the country, you can do so easily via bus or minibus if you are travelling shorter distances. Bus travel is by far the most popular way and it’s affordable.  It’s also great value for money as most of the buses are in very good condition, offer snacks and some even have Wi-Fi.  The 3 most popular companies are:

You can book tickets online or just turn up to the station and buy them before your trip.

A visa for Turkey is relativity easy to enquire.  Unless you are from a visa-exempt country you will need to get a visa to enter Turkey.  To save time and hassle when you arrive you can easily get a Turkey visa online which is called an e-visa.  For some countries, you are allowed to get visa on arrival but it’s always best to get it sorted before you go so there are no hold-ups and you can start to enjoy your holiday straight away! 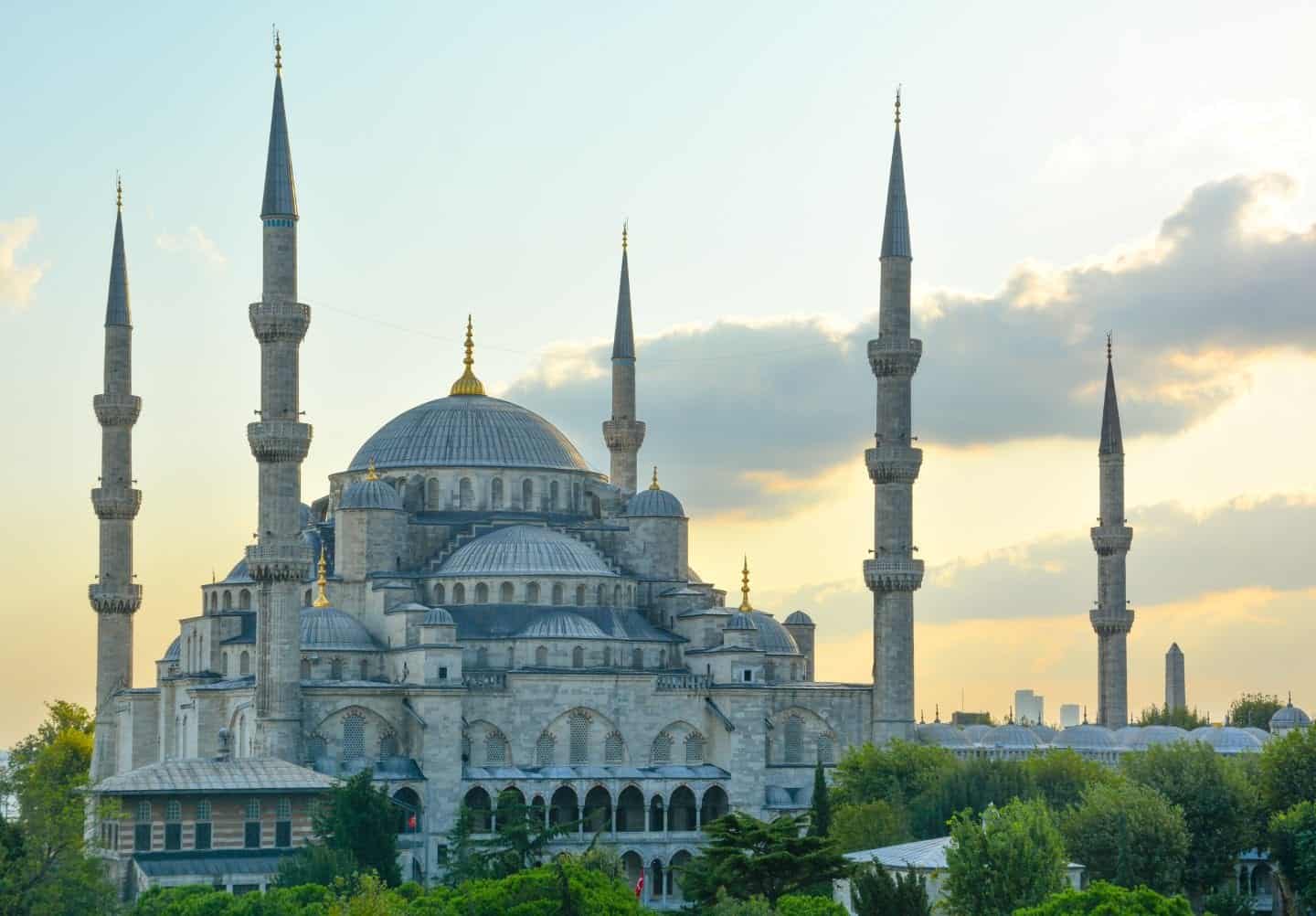 26 places to visit in Turkey

Istanbul is number one due to being such an interesting city with so many things to do.  The food is incredible, and the history is equally as incredible!  I highly recommend eating your weight in Turkish delights as well as trying a fish sandwich on river Bosporus.  A ferry cruise can also be a great idea to see the beauty of the city from the water. 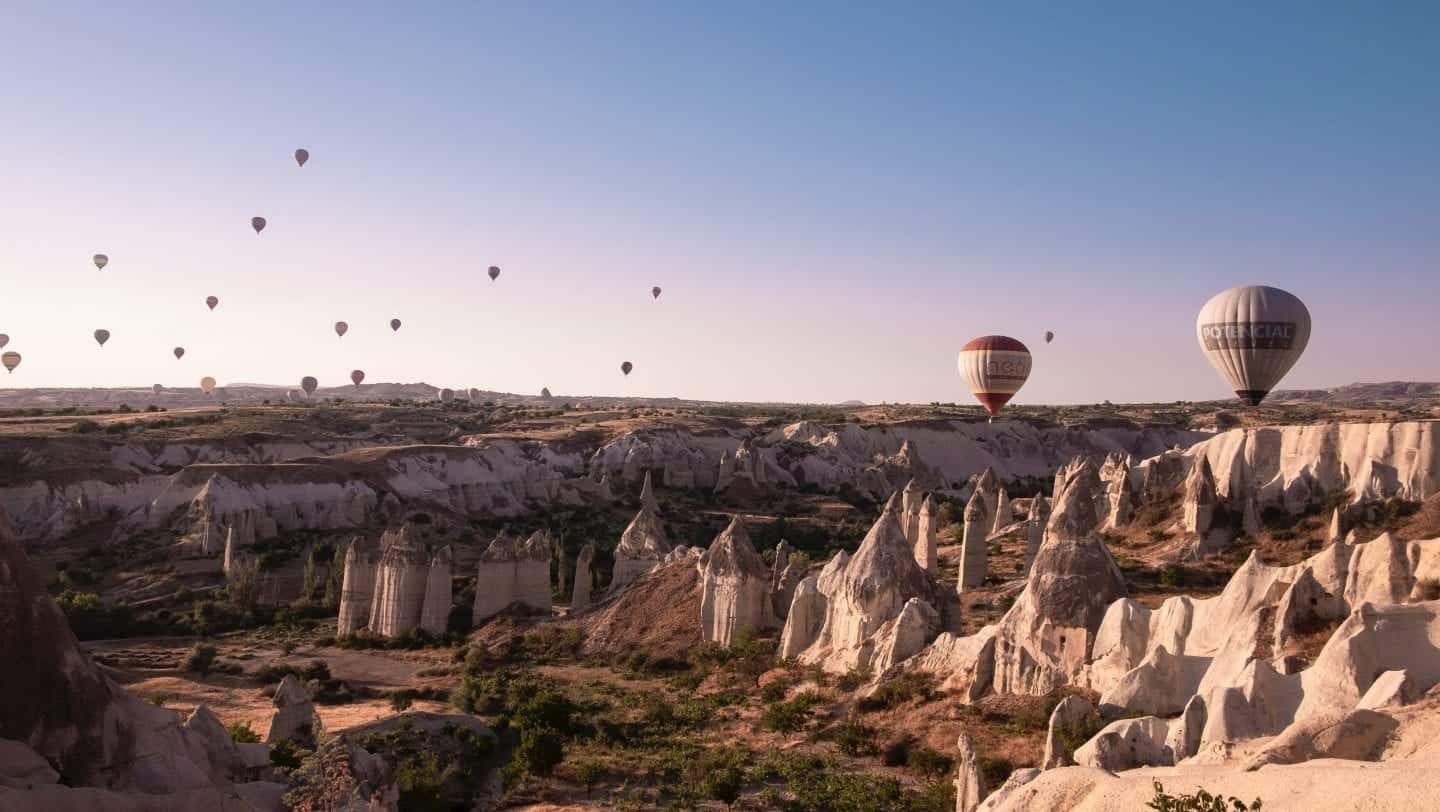 Cappadocia is one of the most famous places within Turkey and rightly so, it’s god damn beautiful!  The natural rock formations also known as fairy chimneys make this area of the country in my eyes the most interesting.  Whilst in Cappadocia you must take a balloon ride to experience the landscape from above.  If you’re not so keen on a balloon flight you can always watch them from afar on one of the rooftops.

The archaeological site of Troy is not to be missed on your travels through Turkey. Even if you haven’t watched the movie (me) you will find it very interesting.  The city is mostly in ruins but it is over 4000 years old so what do you expect really?!  Troy is not home to only one ancient city but there have been 9 cities that have thrived here. Troy is one of the most famous archaeological sites in the world and sees thousands of people per year. 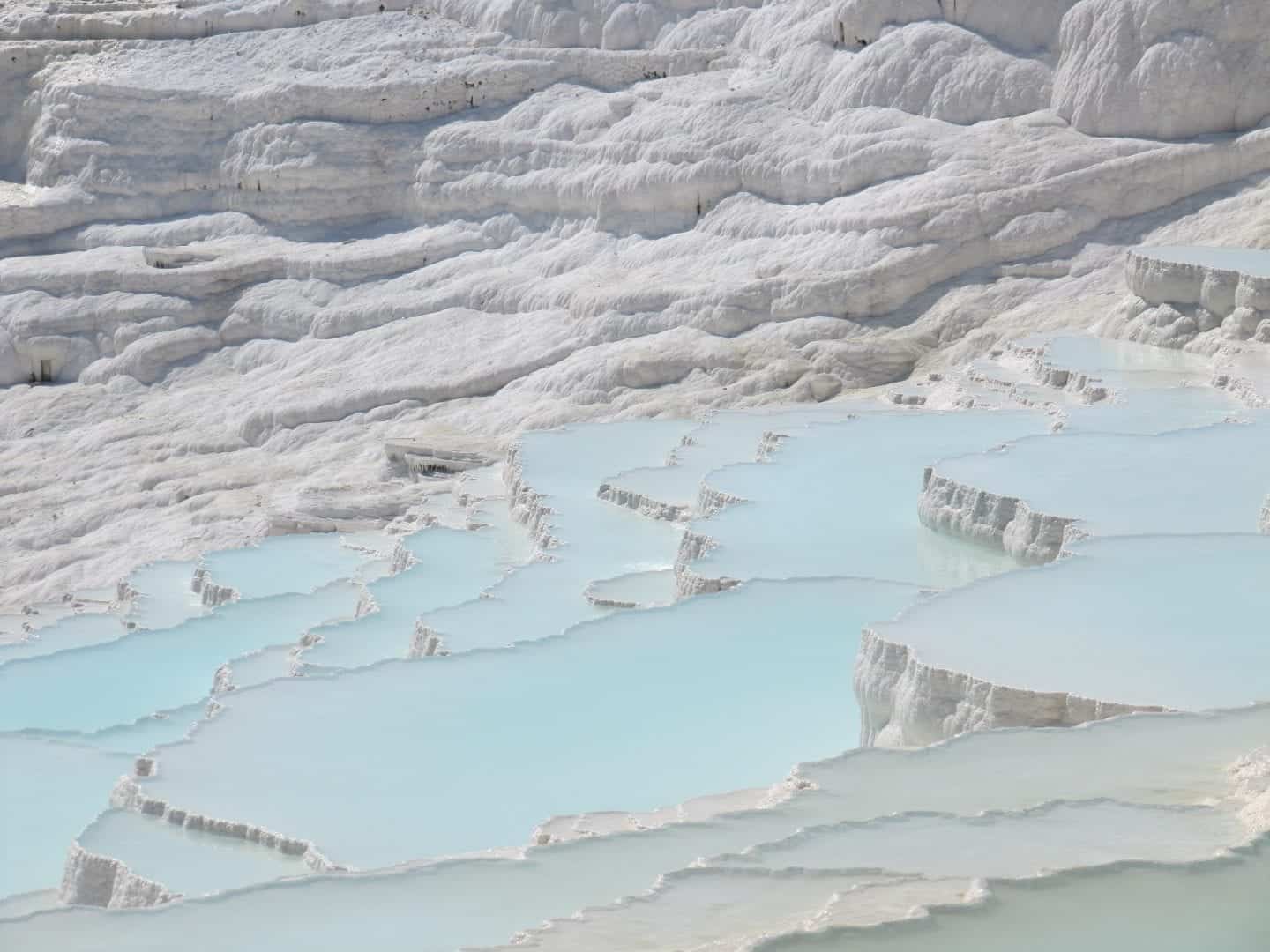 Pamukkale is not to be missed on your trip to turkey!  Its natural thermal rock pools are a must-see.  The white rocks with the light blue water not only make a beautiful Instagram photo but it’s one of the most beautiful natural sites in the world and is now protected (thank god!). The thermal pools are rich in minerals.  There’s also ruins of a Roman city who used to use these pools as baths back in 190BC. 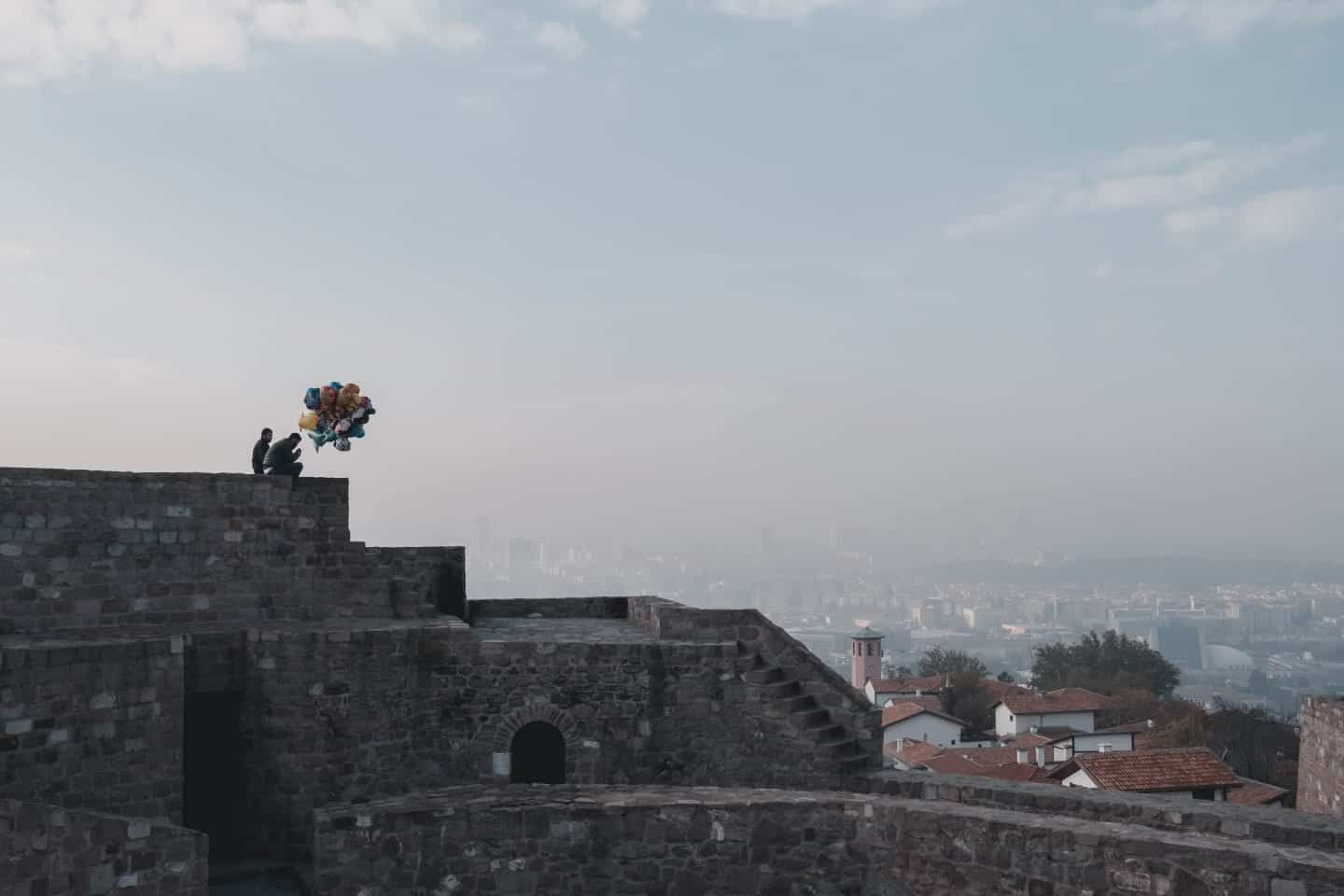 Ankara is the capital of Turkey but funnily enough, it’s the second-largest city in Turkey (Istanbul being the first of course).  Ankara is a mix of modern and old with lots of old sites to see within the city. 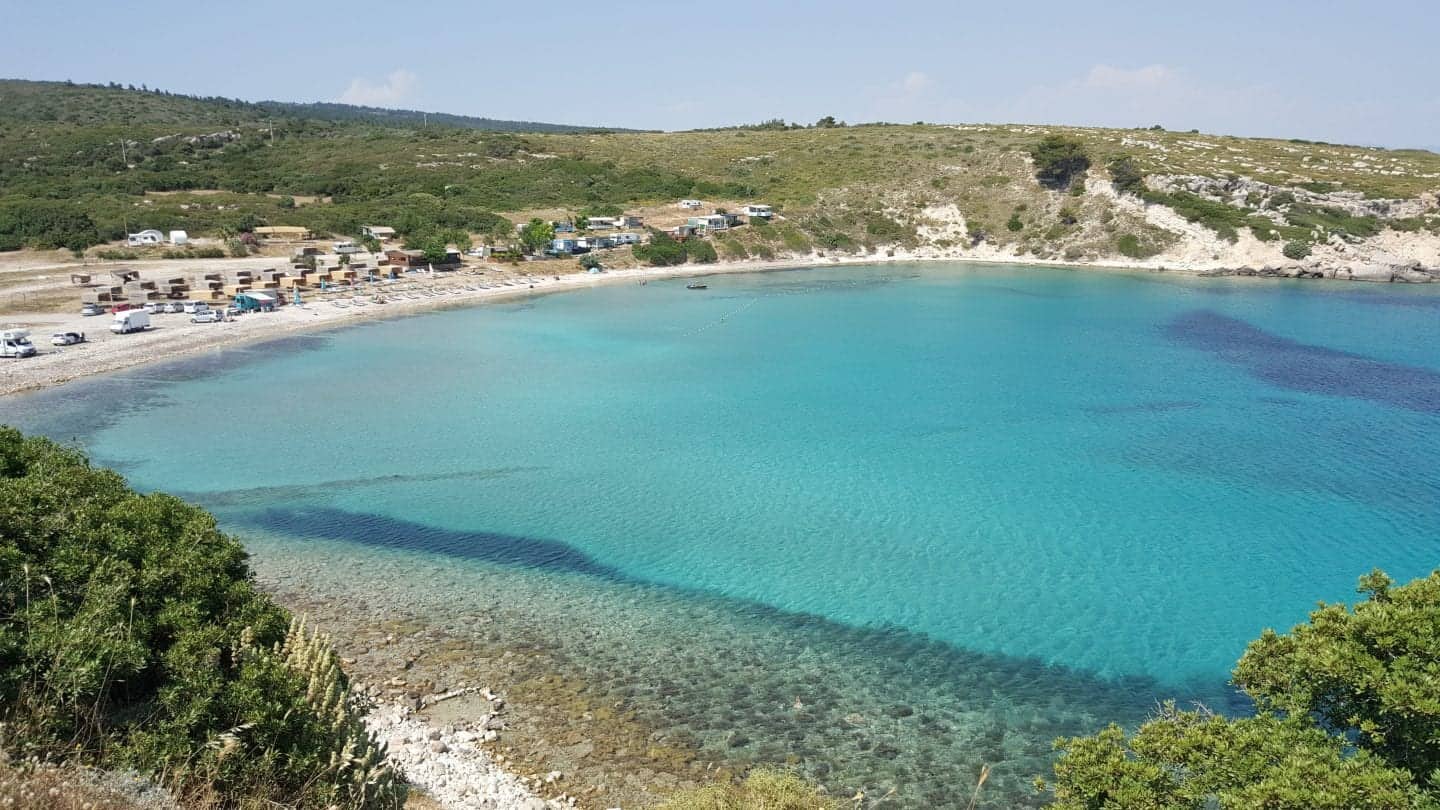 Izmir lies on the coast of Turkey and holds some of the best archaeological parks.  This is the third-largest city in turkey.  One of the best things to do in Izmir is to visit the Roman Agora of Smyrna which is now an open-air museum! 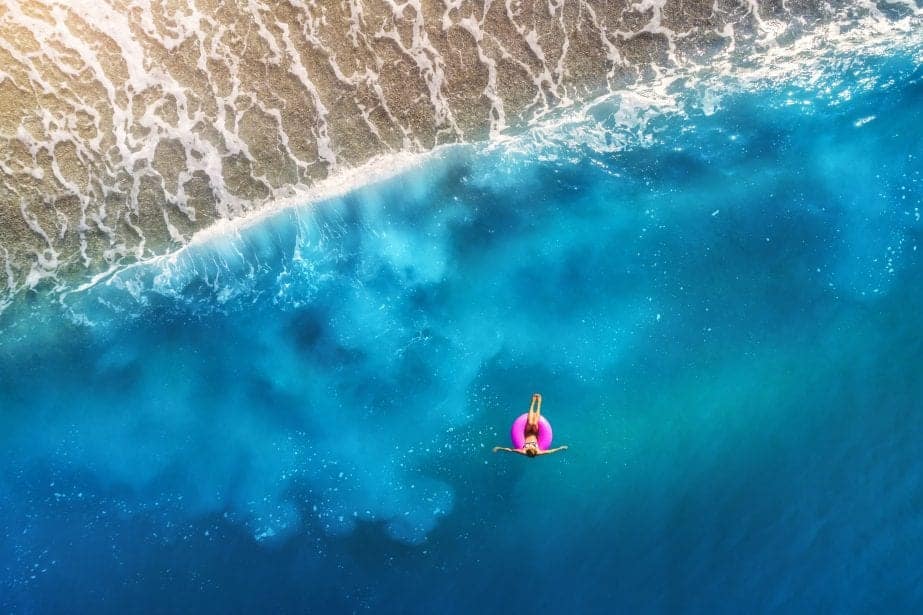 If you’re looking for a Turkish paradise this might be it!  Fethiye sits on the southwestern coast and is known for its striking turquoise water and the Amyntas Rock Tombs.  These tombs are dated back to the 4th century BC and are carved from a rock which is in the side of a cliff.  It’s very impressive and a must-see when visiting Fethiye. 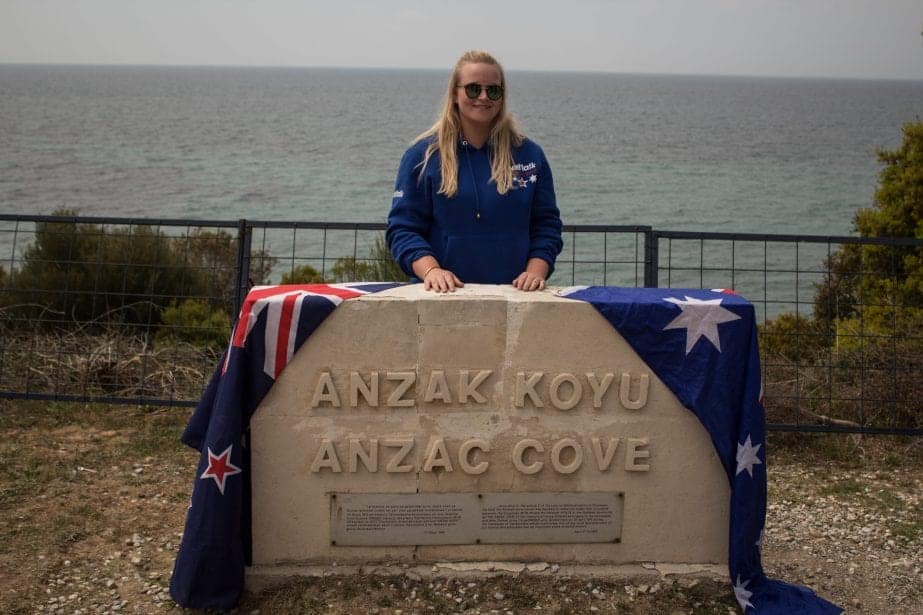 If you’re a New Zealander or an Australian, then Gallipoli will mean a lot to you.  This is where thousands of people died in a bloody war.  Every year on April the 25th we commemorate the soldiers that lost their lives here in an unfair battle.  Gallipoli is not only an important historic destination but it’s also a beautiful place to visit.  It’s hard to imagine what this place would have been like in 1915-16. 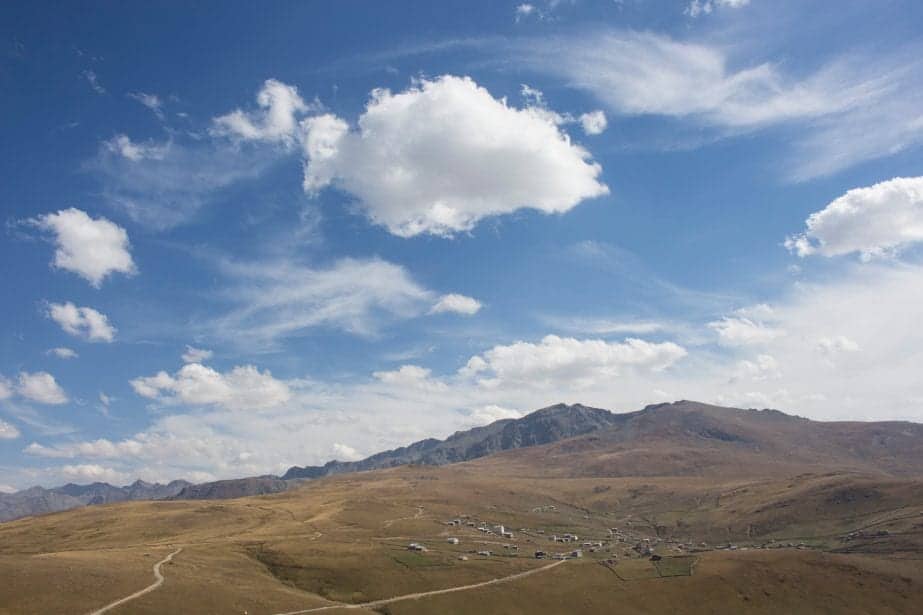 This city lies on the black sea coast and is a beautiful stopover on a trip to turkey. Situated on the water and within a valley of stunning mountains and landscape, Trabzon is a beautiful city in a beautiful location!

Bodrum is another coastal city sitting on a beautiful bay with a castle and immense history. There’s plenty of things to do, particularly if you’re a diver as there are some great reefs and caves! 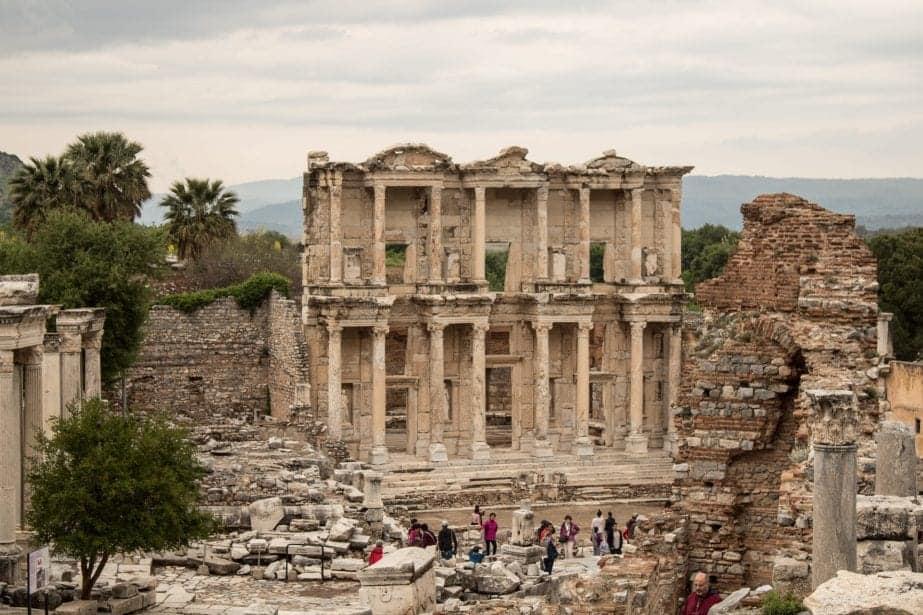 A stop in Turkey wouldn’t be complete without a visit to Ephesus, the ancient city!  Within the Izmir province is the ruins of this ancient city which dates to the 10th century BC.  This was one of my favourite ancient cities I visited whilst in Turkey! 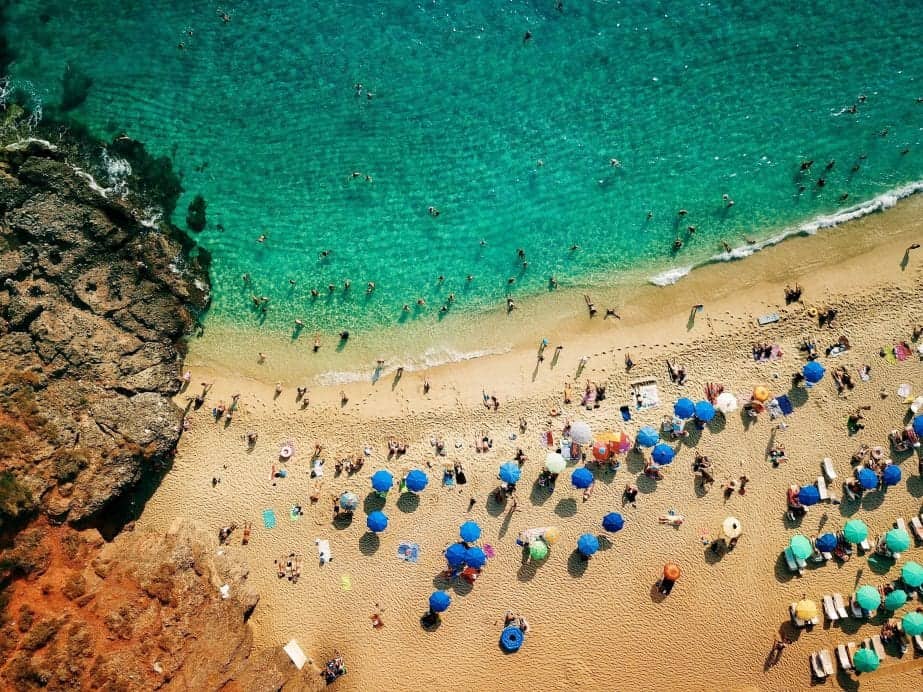 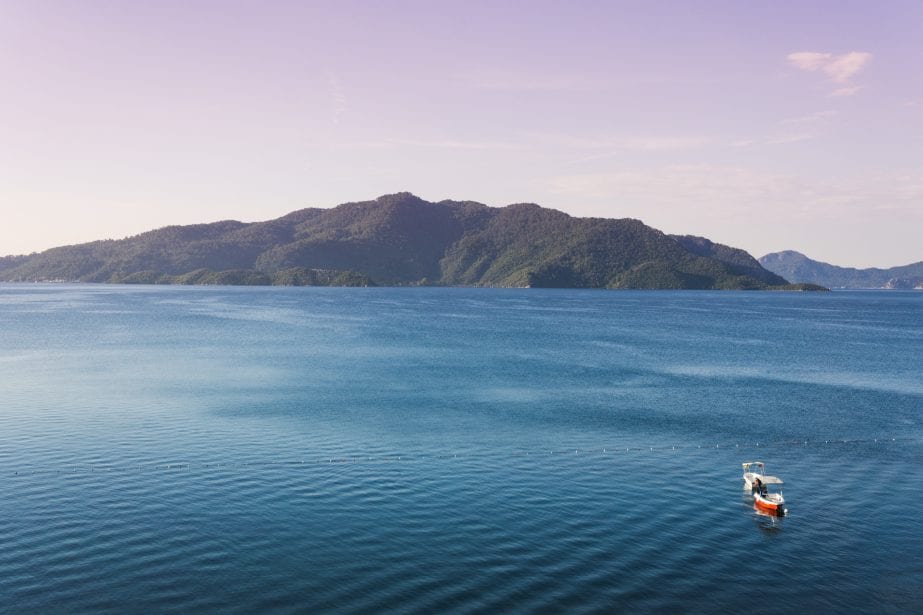 Marmaris is another Mediterranean town within the Turkish Riviera.  It’s another popular place for holidaymakers and is known for its clear turquoise water and lively nightlife during the summer months. 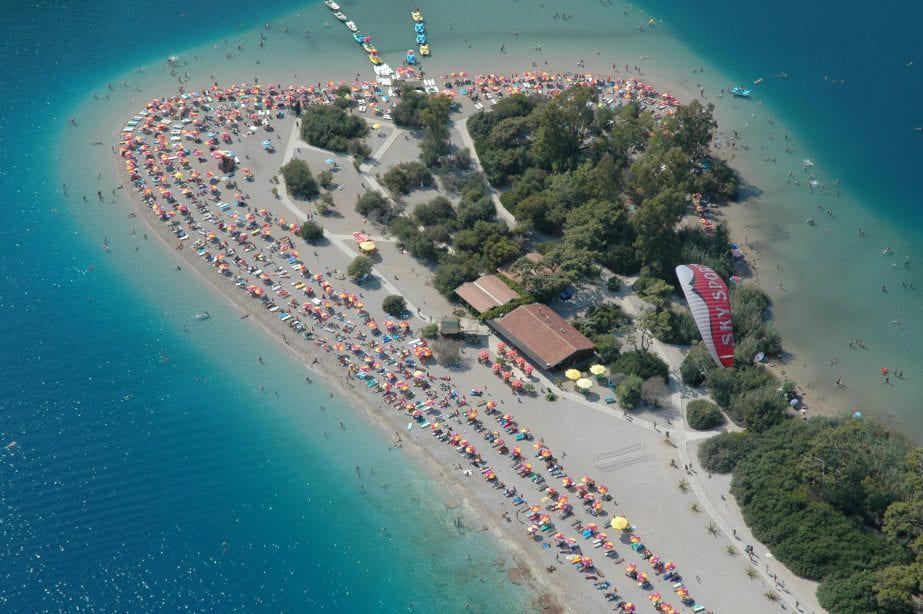 Another incredible resort town, Oludeniz is known for its beautiful beach and the blue lagoon of Ölüdeniz Tabiat Park. This is part of a protected national park and a must-see stop on your travels to explore the natural wonders of turkey. 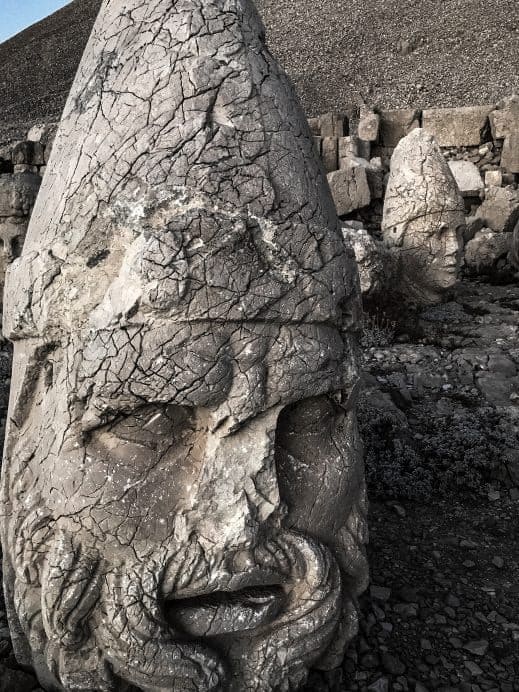 This has got to be one of the most incredible archaeological sites within Turkey and in the world.  Alayna Mount is one of those sites you just gaze in mystery and wonder, how did they build this?!  Giant carved rock heads which were built in the 1st century BC weigh approximately 6 tonnes each (10 meters tall) under the Commagene Kingdom.  If you’re into history and man-made wonders, look here! 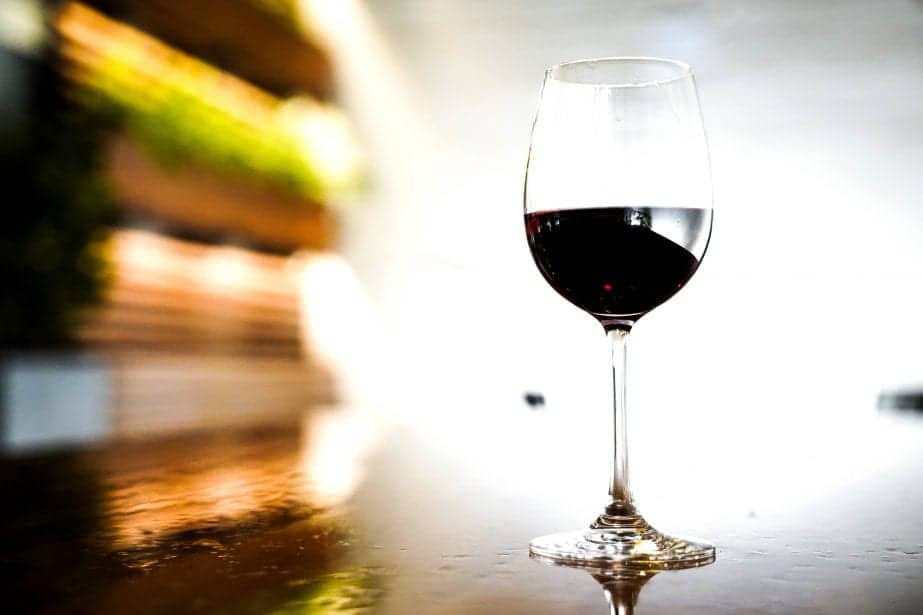 Şirince is a very small village consisting of just 600 residents set within the Izmir province.  This quaint village is known for its old ottoman style houses set within a luscious landscape. One of the best things to do here is wine tasting as the region is famous for its delicious grapes.  Also, try some of the locally produced olive oil, it’s delicious!

This town is within the black sea region and is listed as a UNESCO site.  This town was once an important stop on the trade route between Europe and the orient. 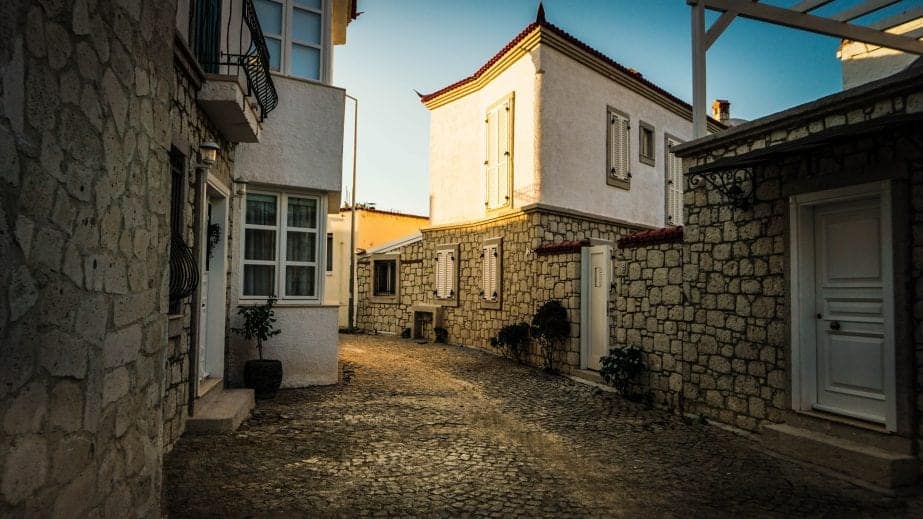 Within the Cappadocia region, Cavusin is an old village with a beautiful church called Saint John, which is built right into the rock formations. There’s a new town and an old Greek village within Cavusin.

Datca is known for its stunning blue water and being the meeting point of the Mediterranean and the Aegean Sea.  This remote town is a great option to get away for the crowds and enjoy some serenity on the water! 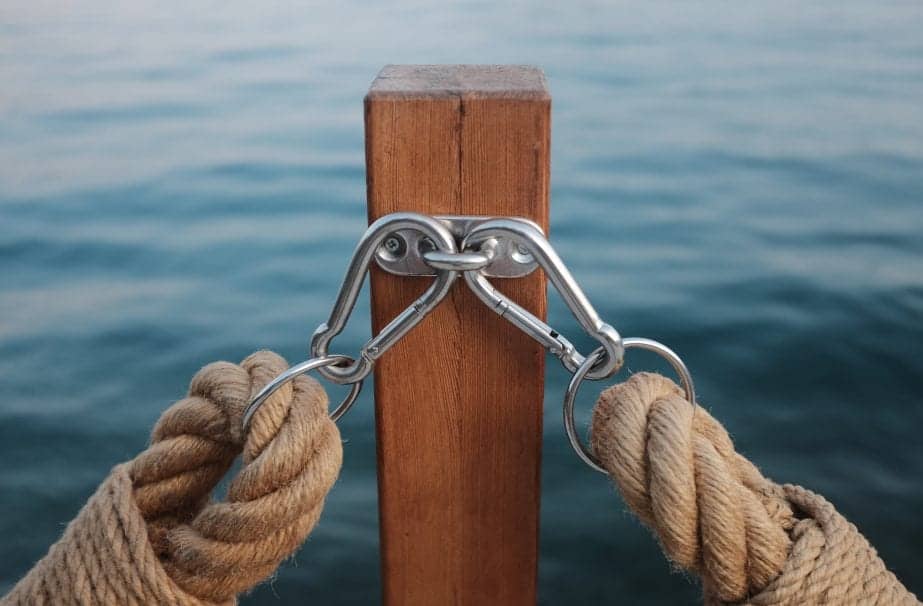 Within Dalaman and Fethiye is another town which sits right on the water.  Gocek is known for its beautiful bays and is protected so no multi-storey buildings are allowed here!

Want to go island hopping in Turkey?  Visit Kekova, one of the best places to visit in Turkey!  There are no inhabitants on this island so a boat trip to Kekova is required.  Check out some of its fascinating history, beautiful caves and idyllic setting. 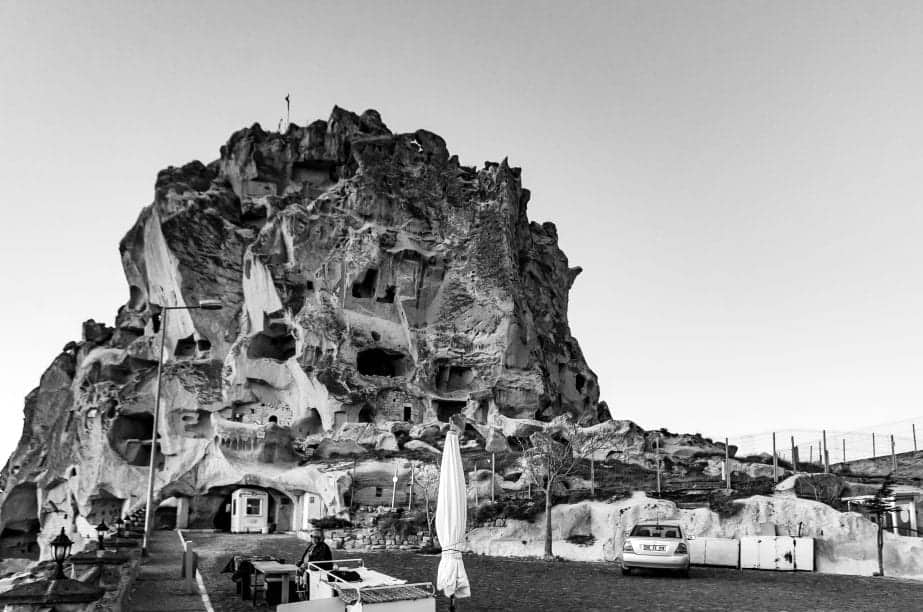 Uchisar sits as the highest point in Cappadocia and is known for its stunning castle with a panoramic view!  A trip to Cappadocia would not be complete without visiting Uchisar! 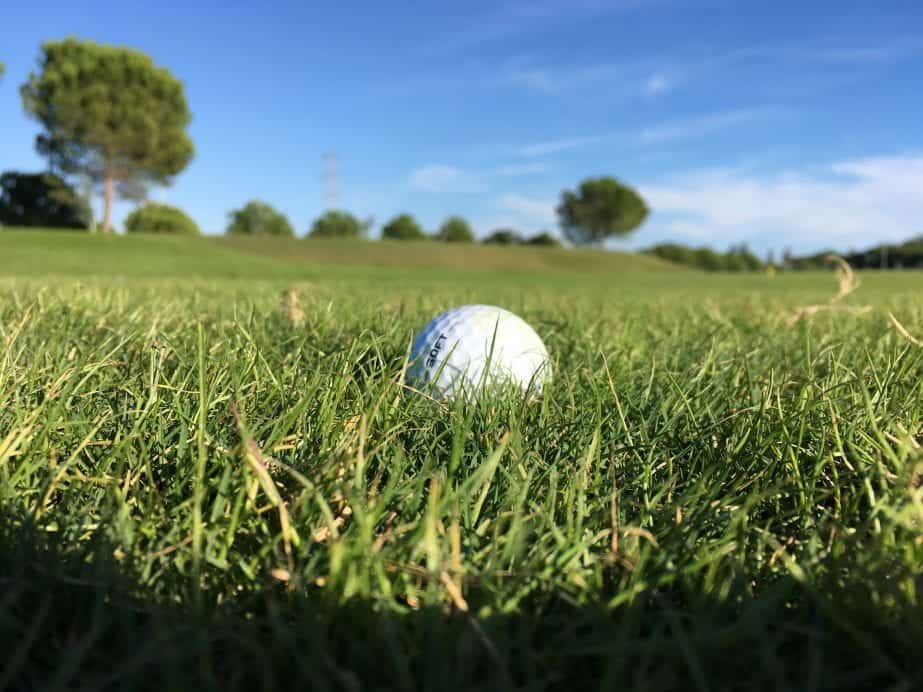 Belek is a town on the water famous for its golf tournaments and historical sites nearby.  With its beautiful sandy beaches and luscious landscape, Belek is one of the best places to visit in Turkey, especially if you’re a world-class golfer like Tiger Woods!

Olympos is a favourite destination within Turkey, especially for backpackers.  There is a stunning 5km beach as well as the ancient ruins which include a bath, a Roman theatre and much more. 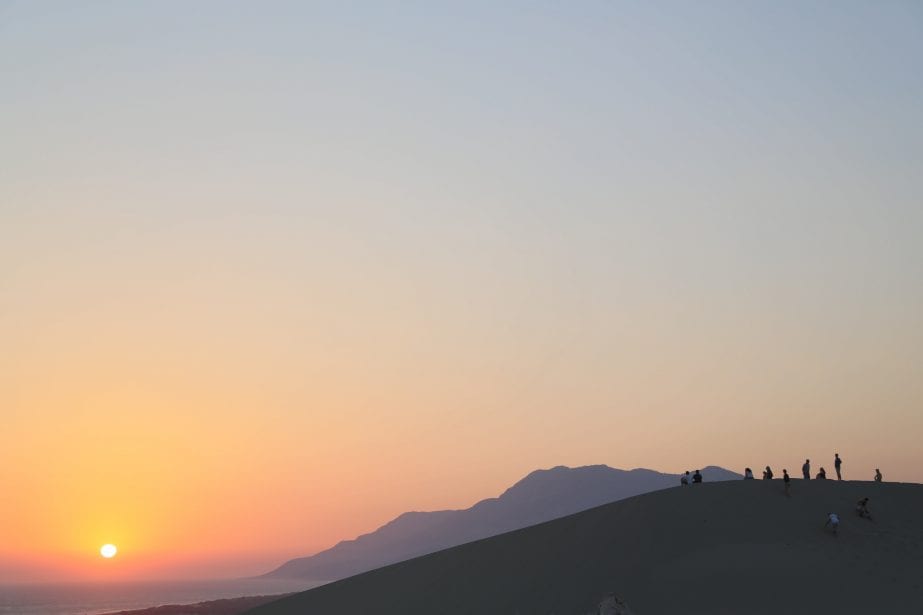 Patara holds one of the biggest beaches within the Mediterranean and is a protected site for…turtles!  It’s is also known as the birthplace of Santa Claus. While you’re in Patara be sure to visit the ancient ruins.

There’s your full Turkish travel with everything you need to know about Turkey!  Tell me below which 3 places to visit in Turkey are at the top of your list! 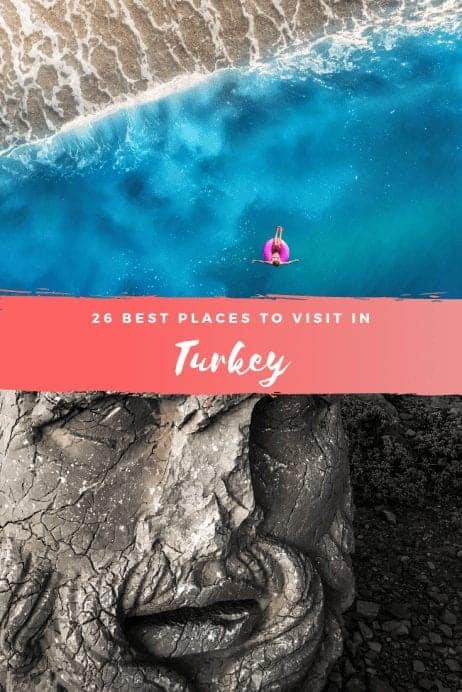 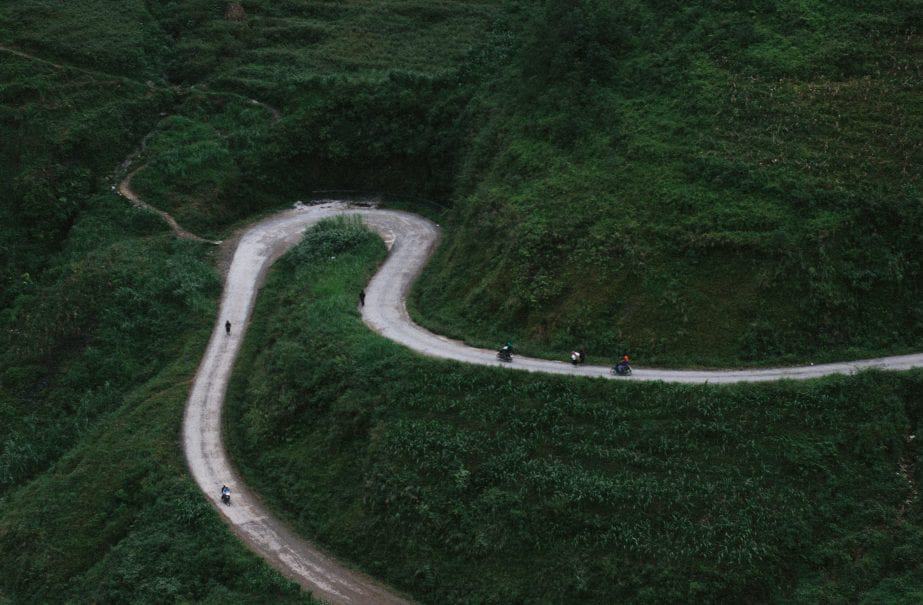 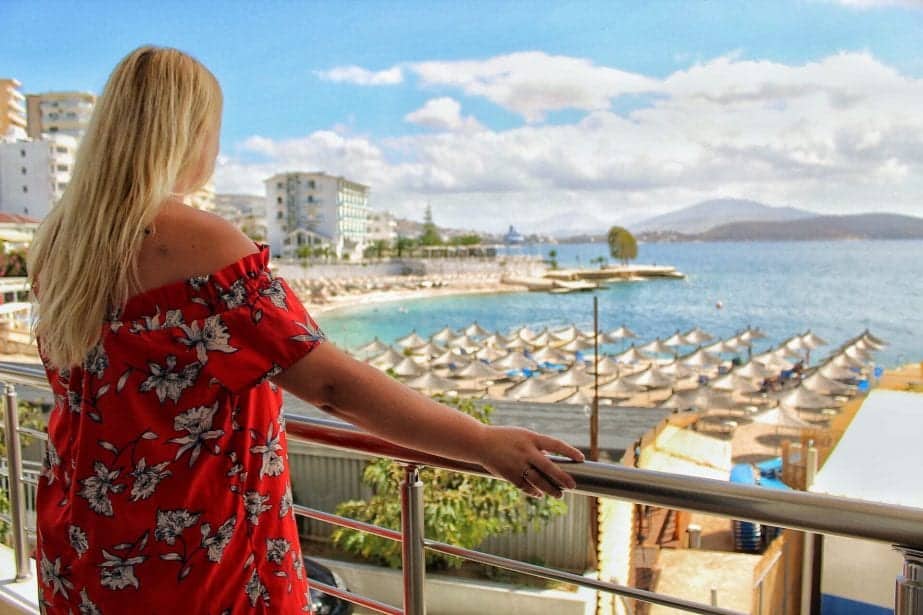 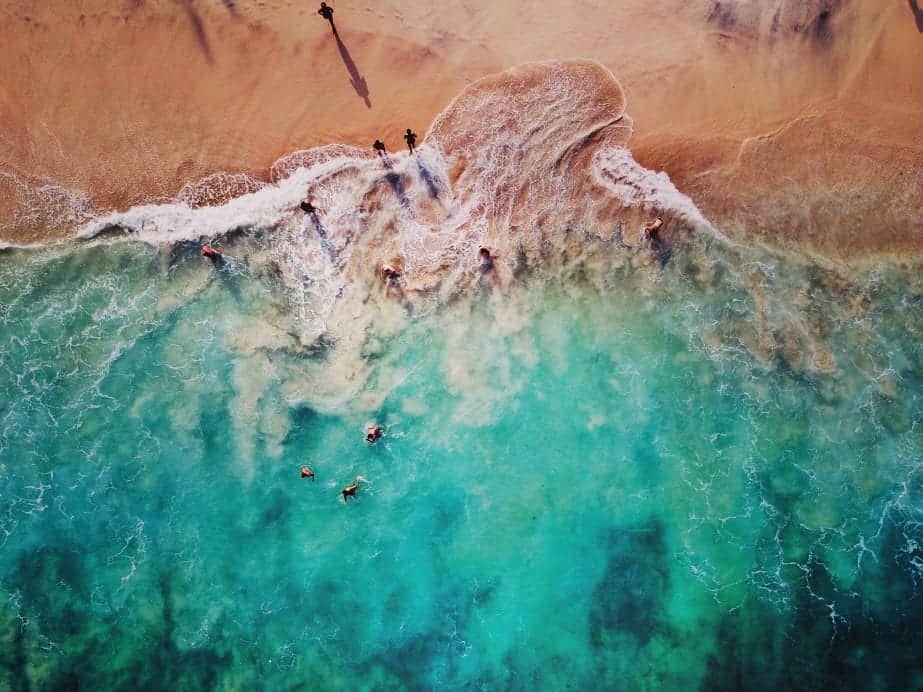 12 Most Beautiful Places to Visit in Indonesia 2020