Albanian Weekly Aventurës 4: My Thoughts on Tourism in Albania

The summer tourist season is ending here in Saranda (thank god).  I love Saranda, but I love it more when it’s not July and August here as during those times prices double and the city is full of people.  Not to mention it’s hot.  Now I LOVE summer and it’s my favourite season but this year I am just over it, mostly because I have had to work so much and be inside for most of it I guess!

But tourism in Saranda this year has been strange. I have talked to a few different businesses and they all confirm it wasn’t like it was last year.  My personal thoughts?  I think it’s all about trends.  Now people are venturing out of cities like Saranda because it’s becoming more easily accessible to get to more places.  For instance, I have seen SO many people hitting up other places in Albania such as Dhermi.  Now, I’m not sure what tourism was like there this year if it rose or fell but I have a feeling that this year the trend was to visit that specific place as well as beaches like Gjipe. People are spreading all around Albania.  I am so interested to know the tourism numbers for the 2018 summer season!

Albania does have to be careful though as they don’t have the info structure to keep up with rising tourism.  The answer is not to add more sunbeds to the beaches, its ruins it.  And although I understand its more profit, it’s not viable for the future.  A beach full of sunbeds is ugly.

Another point which is specifically focused on Saranda are the prices.  Another reason I think more tourists are venturing out of Saranda is the rise in prices.  Every year it’s becoming more and more expensive.  Talking to tourists this year they are surprised at how expensive it is for food etc compared to other parts of the country.  In July and August, the prices for food and apartments double.  In September they fall again.  Saranda is known for being the most expensive place in Albania.  I get it, it’s beautiful but businesses in Saranda must be careful because the affordability is one of the reasons people are attracted to come here.  And if the prices are rising people are going to stay elsewhere (hence maybe therefore this is why so many people have not picked Saranda to stay in this year).

Which brings me to another point.  Apartments.  I met two girls who rented an apartment for over 700 euro for the month!  This price is ridiculous to me.  People could rent an apartment elsewhere in Europe for the same price.  As an example, I have an apartment and I pay 150 euro per month.  This is the price which locals would pay.  But I do understand that locals have to make most of their money in the summer months here because in the winter tourism dies here.  But what if tourism could extend throughout the winter months?  Saranda in the winter (as a tourist) is not so bad you know.  Saranda itself gets over 300 days of sunshine a year.  Winter is cold (just like everywhere in Europe). 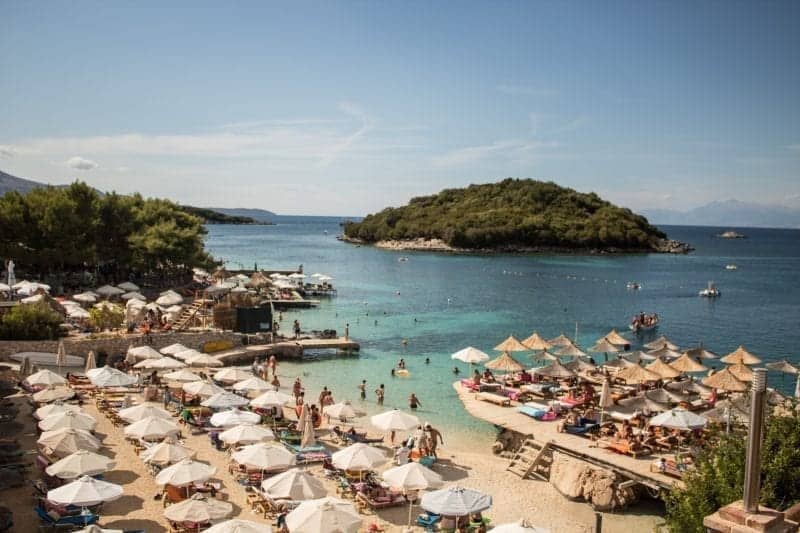 July vs April in Ksamil, Albania

My hopes for tourism for Albania?  I hope that tourism can be spread out throughout the year instead of just two or three months.  It would be much better for the locals as they don’t have to work the same hours in two months as you would in one year.  The locals are overworked in July and August and by September everyone in Saranda is over the summer.  Therefore, I promote tourists coming here in the offseason and I also recommend this place for digital nomads.  I hope tourists can make Albania a permanent home like I have and that you can see the beauty in Albania, not just in July and August.

I would love to know your thoughts on Albania tourism in the comments below.  Let’s have a discussion!  Please remember this post is completely my opinion.

3 Beaches Near Auckland You Need to Check Out

Getting an Albanian Visa: Staying Long-Term in Albania