10 Incredible Cities in Albania to Explore 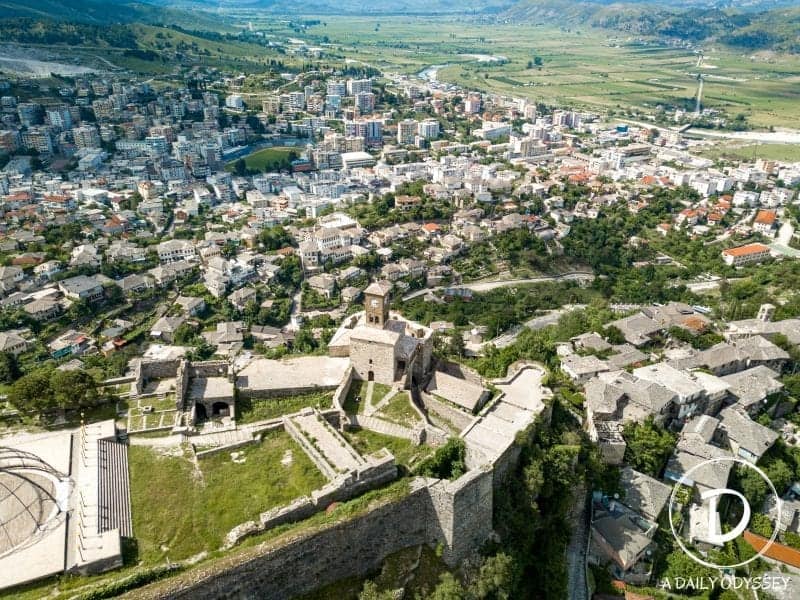 There are so many great cities in Albania that many have never heard of.  Albania is still a relatively undiscovered country.  There’s a lot on offer when you visit Albania, from sandy beaches to a fascinating and dark communist past as well as a thriving slow food movement, here are the best 10 cities in Albania you should think about visiting.

What I love about Albania is that all these cities are vastly different from one another and each offers its own unique experience.

10 incredible cities in Albania to explore 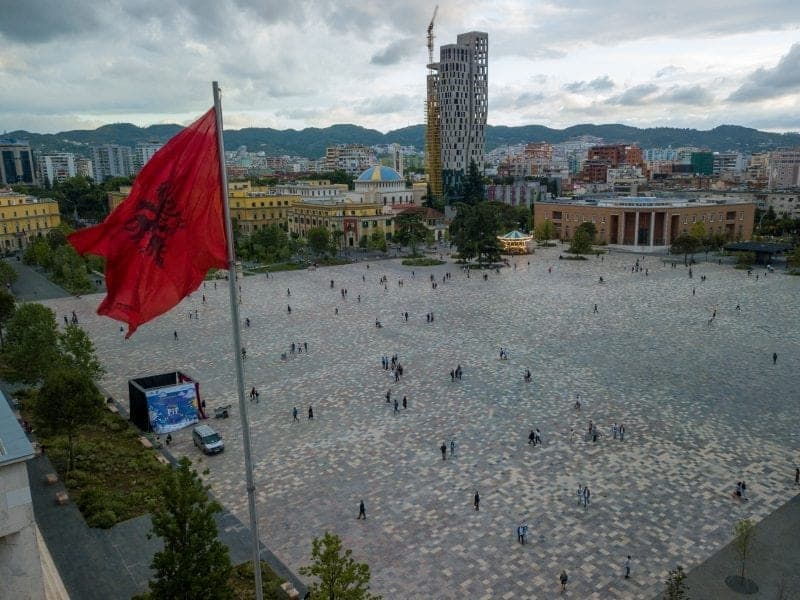 The beating heart of Albania and the capital of the country has evolved so beautifully over the past few years.  It’s full of beautiful cafes, colour, art installations, murals and some great restaurants too.

Tirana is an interactive city and it’s so unique compared to other cities within Europe.  If you want to learn more about the dark communist past of Albania then you have to check out Bunk Art 1 & Bunk Art 2.  Both are set in underground bunkers and lets you see what communism was really like in Albania. Another notable museum is House of Leaves which lets you dive even deeper into Albania’s communist times.

If museums are not your thing, how about a cooking class to learn about Albania’s food scene?  Learning more about the country through food is a great way to learn more about the Albanian way of life.

Read more: 19 Things to do in Tirana, Albania

the best accommodation in tirana 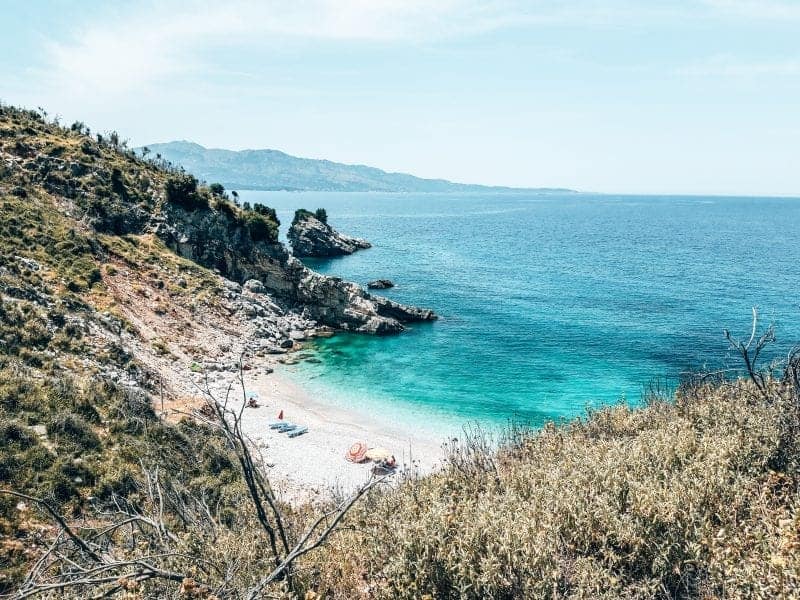 The seaside city of Saranda is a favourite of mine (I have lived here for over 2 years!). During the summer, this is by far the most popular hangout for tourists because of its beautiful beaches nearby.  Saranda is the gateway to the Albanian Riviera which holds some of the most beautiful beaches in Albania.

While visiting Saranda you must visit Lekuresi castle to catch the most fantastic sunset.  Also, don’t forget to visit the ‘Maldives of Albania’ Ksamil and the nearby UNESCO site of Butrint.  There’s also a couple of beautiful beaches just outside the city called Mirror beach and Monastery beach.

Read more: 26 best things to do in Saranda

Only 30km away from the capital and situated on the coast is the Port city of Durres.  It’s known for its history which dates back almost 3000 years ago.  There’s also the second biggest amphitheatre in the Balkans which holds over 15,000 people.

Durres is a port city so it’s not exactly the most beautiful city in Albania but its history, beaches and chilled urban vibe makes it a popular stopover for tourists. 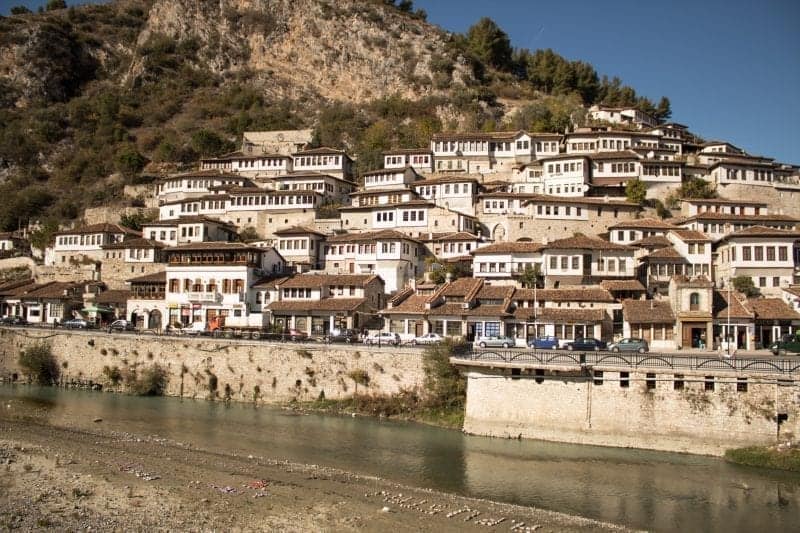 The city of a thousand windows is a UNESCO protected city which is not far from Tirana also.  This beautiful destination is one of the most notable cities in Albania because of its Ottoman architecture and charm.

When visiting Berat make sure you walk (or drive) up to the castle for some incredible views.  Make some time to wander through the cobbled streets of the old town and maybe take a trip out to one of the local wineries for a tasting and a platter. Çabo is my favourite!

Read more: Things to do in Berat

the best accommodation in berat 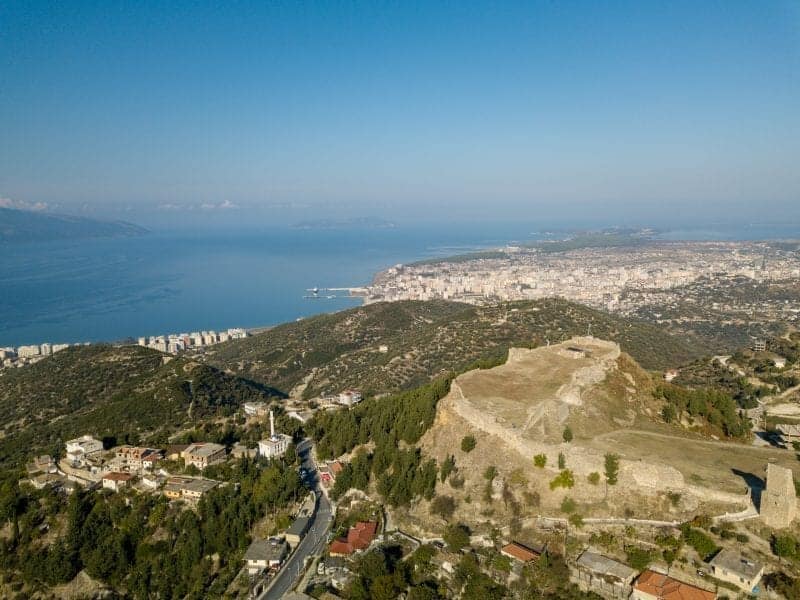 Vlora is another beachside city like Saranda and is the other ‘gate’ to the Albanian Riviera.  The city is much bigger than Saranda and has some great nearby beaches to check out. Radhime Beach is a nice pick!

Vlora is an important city for Albania because it hosted the first assembly which then declared Albania independent from the Ottoman Empire on November 28th, 1912.

Another great thing to do nearby is to take a visit to Sazan island.  This island was a secret military base and home for military and their families but after communism fell the island was left abandoned. Now, they have opened a part of it for tourists to see during the summer.

the best accommodation in vlora

Korce is a quaint city famous for its brewery Korce, one of the best Albanian beers on the market. But, not only that, Korce holds the largest festival which is held just before the Orthodox Easter.

The city is steeped in tradition and is a new must-see city in Albania that many tourists are only just starting to discover.

the best accommodation in korce 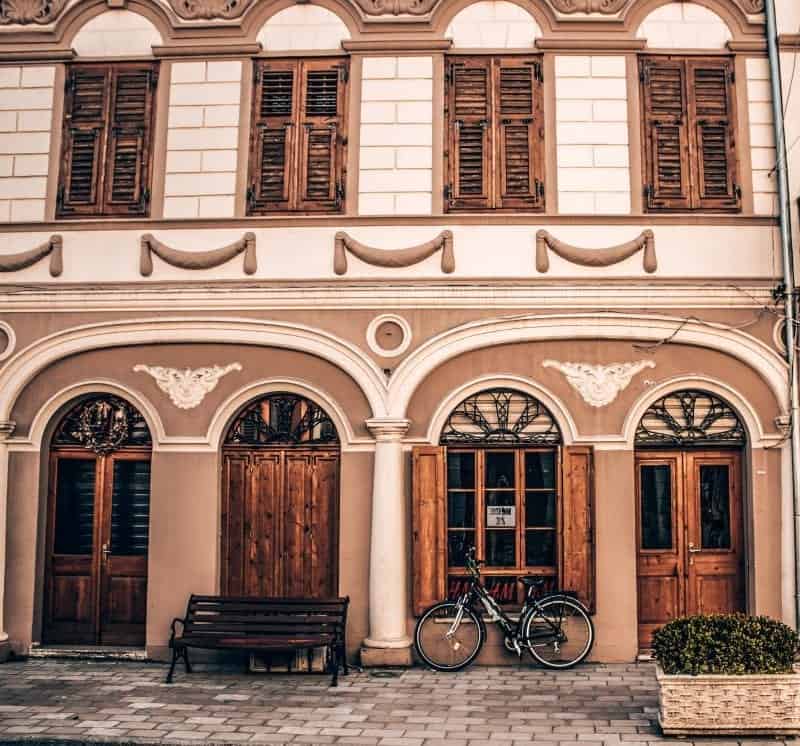 Shkoder is unlike any other city in Albania.  The architecture is completely different from anything you’ll see in the country.  The city is situated right to the north of Albania and is a popular base for people to explore the Albanian alps.

If you do stay in Shkoder, make sure to visit Rozafa Castle and listen to the legend of the woman in the wall.  If you love the outdoors, then take a trip to Theth and do the Theth-Valbona hike.  It’s one of the most incredible things to do if you want to truly see the vast nature of Albania.

the best accommodation in shkoder 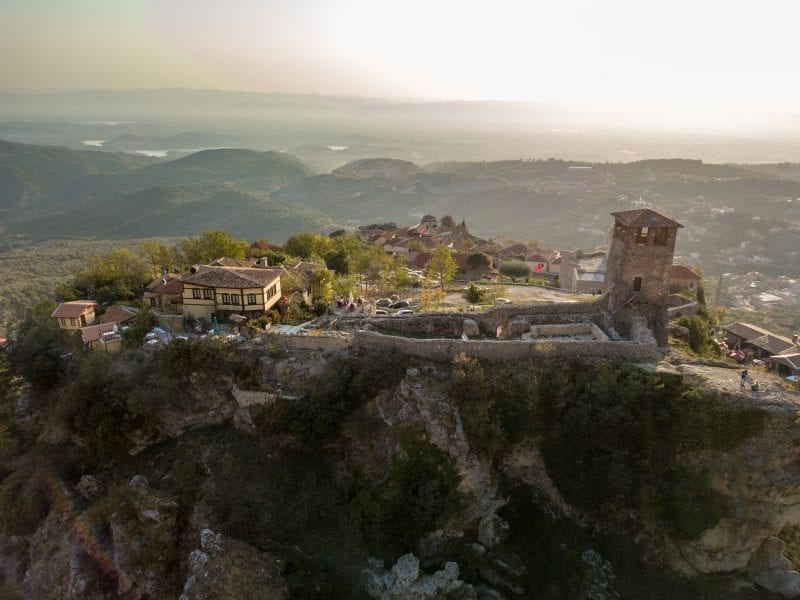 The historic city of Kruja or the city of Skanderbeg is what it’s also called, is one of my personal favourite stopovers in Albania.  Skanderbeg is an Albanian hero who helped the country fight the Ottomans and take back control.  Within the castle walls is a museum dedicated to him where you can learn more about the history of this mountain town.

Kruja also holds the best Bazaar I have ever seen in Albania.  They are the oldest, dating back to the 14th century. You can find so many beautiful treasures, new and old.

If you’re looking for accommodation in Kruja I 1000% recommend you stay at Emiliano Rooms.  It’s a homestay which has a mixture of rooms and little bungalows which overlook the mountains.  This place is situated within the castle walls and the homestay itself is over 400 years old.  They make you feel at home here.  You can also opt for one of their dinners

Read more: Things to do in Kruja, Albania: The City of Skanderbeg!

the best accommodation in kruja 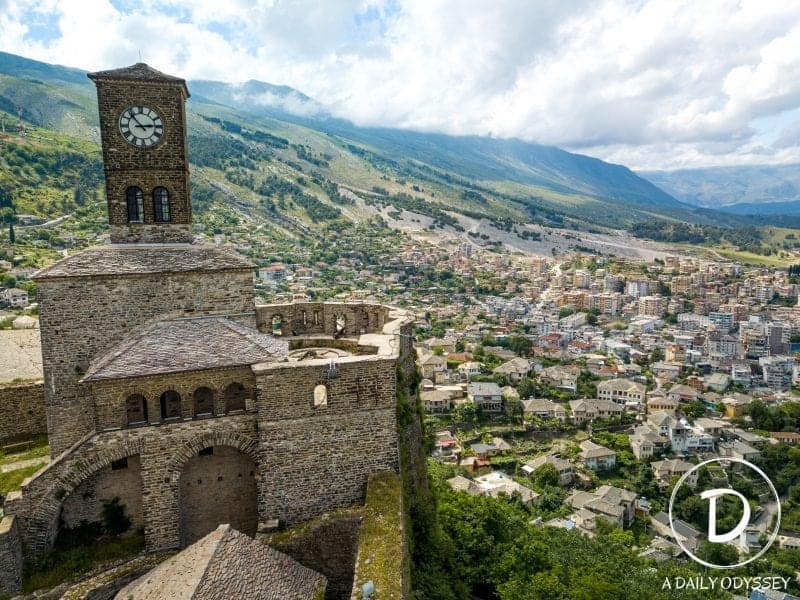 Gjiorkaster is one of the smaller cities in Albania but the old part of the city is a must-see!  This city is UNESCO protected because of its history and beauty.  The fortress is a must and possibly the best fortress to see in Albania.  I highly recommend paying a little extra to visit the arms museum and the old prison.  You can also get a deeper look into history by doing this as there are lots more information in that part of the fortress.

Gjirokaster is only an hour away from Saranda so it makes for a great day-trip or an overnight stay.  If you want to stay the night check out Kerculla Resort which has fantastic views of the city as well as a pool.

Read more: Incredible Things to do in Gjirokastra, Albania

the best accommodation in gjirokaster

Lezhe is not an obvious choice for tourists but it should be because Lezhe is slowly becoming a tourist destination and one of the best cities in Albania.

One of the greatest things to see is Lezhe Castle which is perched on top of a hill overlooking the city.  Within the city, you can go visit the tomb of Skanderbeg along with his helmet and sword. If you want to relax in the sun then take a look at Shengjin Beach, a sandy beach only 8km from the centre.  Nearby there’s also sand-dunes if you feeling like a bit of adventure.

If you love food then you should learn more about Albania’s slow food movement.  Albanian food is becoming increasingly popular because the ingredients are usually grown organically and the flavours and fresh, simple but delicious.  Mrizi i Zanave Agroturizëm is a must-see place.  It is notably one of the best restaurants in the country and has been featured on many TV programs, one featuring the famous British chef Rick Stein.

the best accommodation in lezha

I hope you enjoyed learning about these 10 unique and beautiful cities in Albania.  Tell me below which one caught your eye the most! 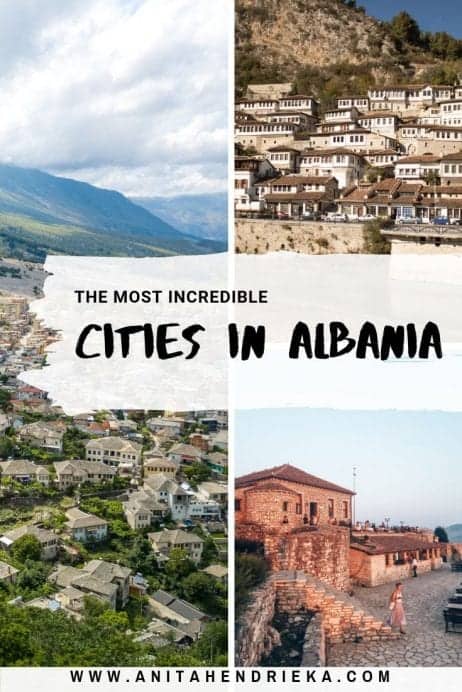 Visiting London On A Budget

Guide: Things to do in Kyoto [Japan]