For five of the ten years I’ve lived in North Dakota, Fargo has been my home. At first, it was just a big city I had to live in because I went to school there. But as the years went on and I ventured outside of the main campus area, Fargo became far more interesting.

In 1996, Fargo – the movie – was released and gained an international cult-like following. In more recent years, Fargo – the series – has been ongoing and introducing a new generation to the cult classic.

Before I dive any farther into the guide, I need to clear up the bit about our accents. No, we don’t all sound like the actors in the movie. If you listen close enough, our Os are long and “for sure” sometimes sound like “fer sher.” But for the most part, we sound like any other midwesterner.

And no, we are not apart of Canada. I’ve had people ask. Besides, Canada probably wouldn’t want us. 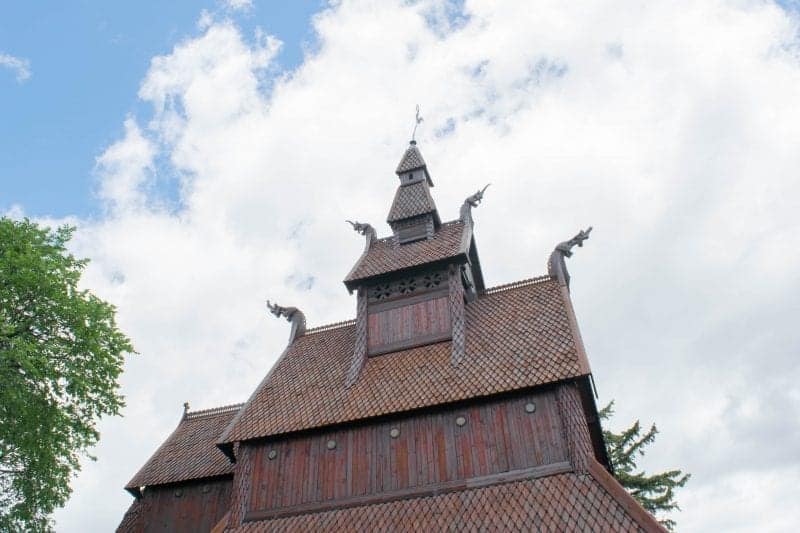 During the days of the Dakota Territory, Fargo was known as Centralia and was a popular stopping point along the Red River. Eventually, the city was renamed to Fargo in honor of William Fargo, director of the Northern Pacific Railway and founder of the Wells Fargo Express Company.

In the late 1800s, like many other cities around the US, Fargo had a great fire that burnt much of the downtown area to ashes. The city rebuilt immediately and over 246 new buildings were built the following year. Eventually, the downtown area fell out of popularity with locals. One of my college professors told me that before the renaissance in the area, people only went downtown for hookers or drugs.

Now, downtown has made an incredible comeback with the help of North Dakota State University renovating several buildings. Businesses began thriving again and now downtown is a popular place to hang out. Bars like Wurst Bier Hall and Old Broadway come to mind when thinking about a place to meet up with friends. 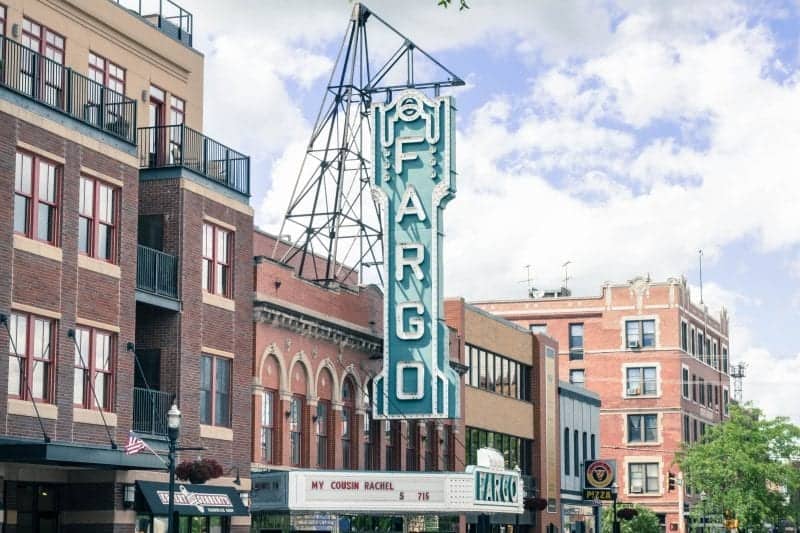 The first thing any Fargo fan should think about seeing on their trip is the Chipper. The Chipper is the actual wood chipper used on the Fargo movie set. You can find the Chipper at the FM Visitors center on the corner of Interstate 94 and 45th street.

If you are looking for some chipper themed beer, check out the Fargo Brewing Company IPA named the Woodchipper. I’ve heard it’s pretty tasty.

The next thing that’s a must-see is the Fargo sign on the Fargo Theater. It’s almost as Iconic as the Welcome to Vegas sign… almost. The theater is still in use for movies, plays, and even the premiere of Fargo, the TV series.

The Norwegian Stave church and Viking style boat at the Hjemkomst Center in Moorhead, Minnesota. The church is a replica of one still standing in Norway built around the late 1100s early 1200s. Inside the Hjemkomst center, you can learn more about the history of Clay County in Moorhead, but I think the main attraction is the replica Viking style boat that was built by a local family. When the family completed construction of the boat, they sailed it from Duluth, Minnesota all the way to Norway. How crazy cool is that?

You can wander around the Stave church outside without paying an entrance fee, but you cannot enter the church without an official tour guide.

Another popular place to check out in Fargo is Bonanzaville, a collection of historic buildings and museums located in West Fargo.

What to Eat and Where

Sickies Garage – Home of fifty burgers and fifty brews. They have delicious award-winning burgers that sometimes are pretty creative like their Glazed Donut Burger. They used glazed donuts for the bun. I haven’t been brave enough to try that one, but maybe you will be!

Nichole’s Fine Pastry is your go-to place for sweet treats. Everything I have tried there has been amazingly delicious.

If you are looking for some delicious Chinese food Lucy’s North China Cuisine is the place to go. You go up to the cash register to order and usually by the time you get your drink and napkins, your steaming hot food is waiting on the table for you. 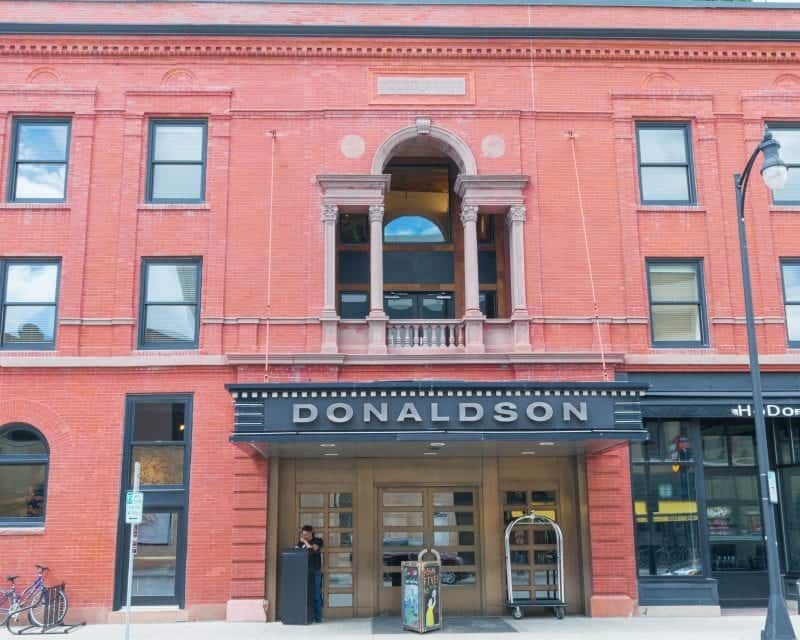 The Hotel Donaldson is the most well-known boutique hotel in the Fargo-Moorhead area. Locals refer to it as the HoDo and from what I’ve heard, they have a pretty good restaurant on the first floor.

Fargo also has all of your typical hotel chains from Holiday Inn and IHG hotels to Choice Hotels and quite literally everything in between.

We even have some places listed on Airbnb you can stay at if you prefer.

You can fly directly into Fargo’s Hector International Airport. The airport has all of the major carriers, Delta, United, and American.

Fargo has both Uber and Lyft, but those can get pretty spendy if you want to venture outside the city limits and see what’s beyond Fargo. Spoiler: lots of farm fields and cows, but outside of the city at night, the stars are incredible. You might even get to see the northern lights. I would recommend renting a vehicle when you visit the area.

If you choose to visit Fargo in the winter, come prepared. Our winters are cold. Bring plenty of warm layers. If you come during the summer, be ready for hot temps. North Dakota has both extremes. It can be -40F in the winter and 100+F in the summer.

Niki is a recent college graduate still trying to figure out what she wants to be when she grows up. Her passions in life are travel, photography, and writing. You can find her at Chasing Departures where she shares travel stories, photography, and more.  Check out here Facebook, Twitter and Instagram. 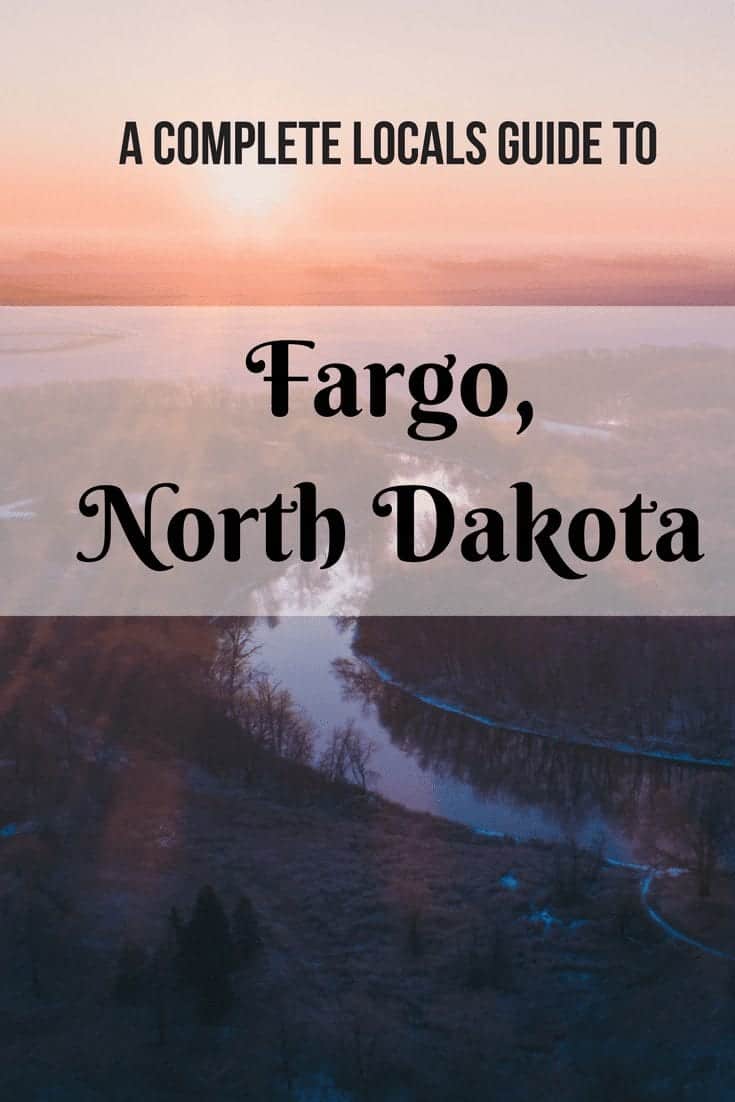 Here’s the Best Things to do in North Lake Tahoe

A Local’s Guide to Zipolite, Mexico

13 Facts About Albania You Didn’t Know