The Best Mouth Watering Indian Food to Try in India 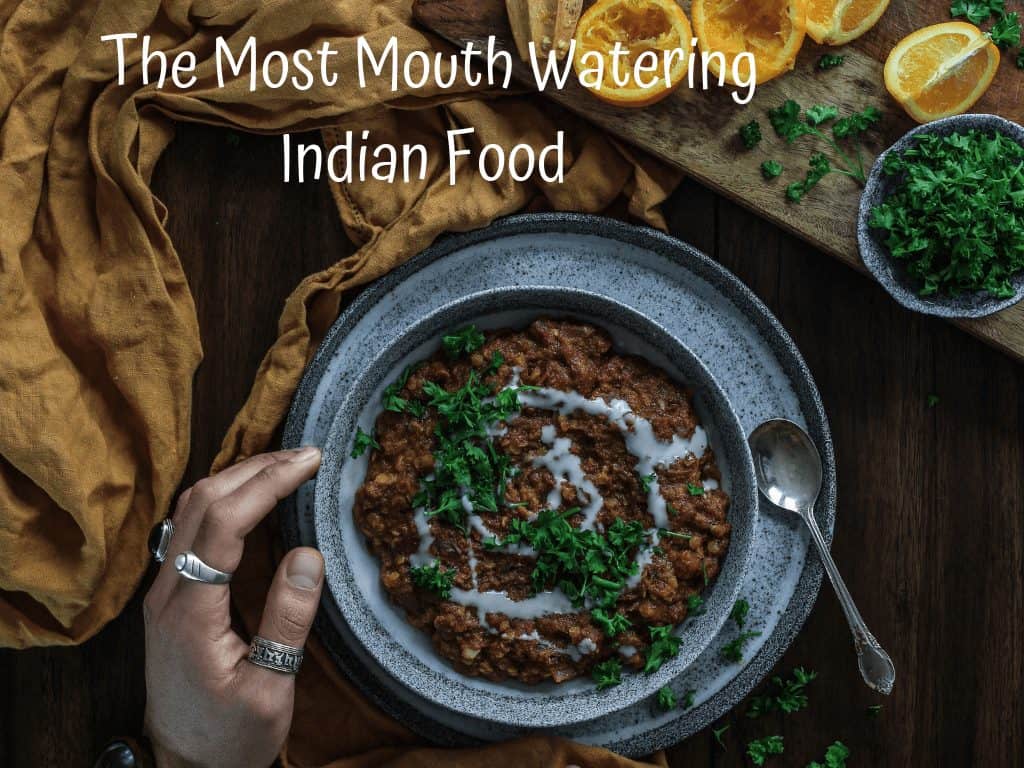 India is an assault on the senses in every way possible- the colours, the smells, the sounds, and of course-the tastes. With a country as large and diverse as India, it shouldn’t come as a surprise that the best Indian food is just as unique as its geography, nor that it is exploding with variety.

With so many different heritages and traditions mixing throughout its borders, Indian food can look completely different depending on whether you’re in the north, the south or the east, or somewhere in the middle. A foodie paradise through and through, India will have your taste buds tingling and oftentimes, your waistline expanding! From the best street food in India, the best Indian sweets to the best South Indian dishes, here are some absolutely must-try dishes as you make your way through this mesmerizing land. 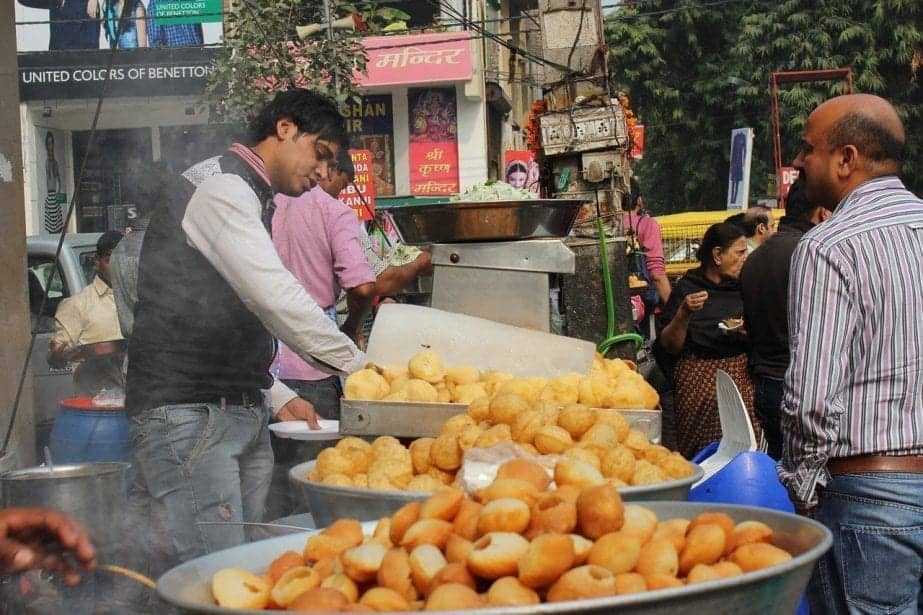 A mixture of potato, fried bread, chickpeas, and both tangy, and hot spices, Chaat is a small appetizer that is an immensely popular Indian food choice that can found all over the state of Uttar Pradesh in the north of the country. Having originated in New Delhi, it’s no surprise that some of its best versions can be found there! Chaat is one of the best street foods in India and comes in many forms, It can also be found by the names of bhelpuri, tikki, aloo chaat, and pakora. While small in size, this delectable dish definitely makes up in taste for what it lacks in in width! 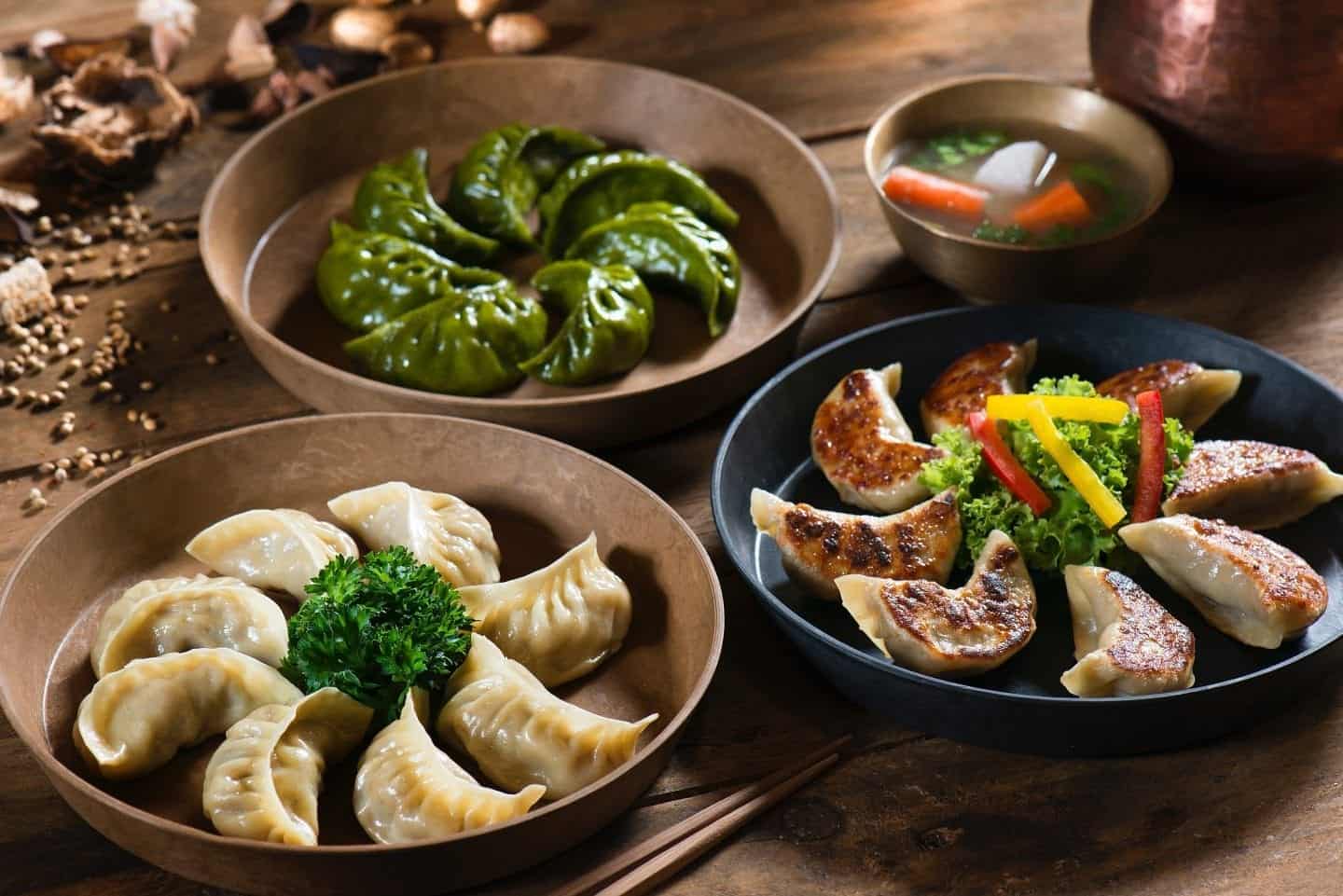 When you think of traditional Indian food, it’s doubtful that dumplings would come to mind. But, in many of India’s mountain states, momos as they are called there, are a true favourite. Similar to Chinese dumplings, momos are flour balls filled with everything from minced meat, to cheese, to tofu to veggies- along with various spices to taste, of course. If you find yourself somewhere in India’s majestic mountains, this popular Indian street food is not to be missed.

If you’ve got a sweet tooth then you will absolutely love jalebi. First twisted into pretzels or corkscrews and deep-fried, this delicious dessert is then dipped in a juicy sugary syrup to give it its signature sweetness. You’ll easily find this popular Indian sweet to spark your sugar high all over Northern India.

Once you taste your first bite, it will be no surprise as to why the masala dosa is one of the most loved Indian foods of the South. Best described as a thin, slightly crispy, stuffed pancake, the masala dosa is airy on the outside whilst bursting with a flavoursome potato filling on the inside. This dish is commonly served with various types of tangy chutneys and can be found all over India’s southern states. Masala Dosa is a popular Indian street food, but is also found in most restaurants in the south.

If you’re familiar with Indian food, you’ve likely heard of (or tasted) chana masala, the chickpea curry dish popular in almost all Indian restaurants back in the West. But what’s chole bathure? It’s a combination of the spicy chana dish but with the addition of bathure, a fried bread made from soft wheat. Popular as a breakfast dish or a snack, Chole Bathure is some of the best street food in India. It is most commonly found as a street dish in the Northern states of Punjab and Uttar Pradesh.

Also heiring from Tamil Nadu, these two popular Indian street foods complement each other perfectly and make a delicious breakfast. Resembling a small pancake, Idli is made of a combination of urad dal and rice. Its spongy texture makes it unique in nature, as its quite different from most other Indian bread items. Vada, on the other hand, is shaped more like a doughnut and boasts a bit of deep frying. This filling snack is made with fermented gram mixed with curry leaf, cumin seed, and mustard. And the flavour doesn’t stop there! These two are usually paired with a spicy sweet sambar (which is similar to curry) and a generous serving of coconut chutney.

Another sugary dessert, Gulab Jamun is a ball-shaped sweet made from milk powders that are reduced to the consistency of a soft dough. The balls are then deep-fried and bathed in a special syrup to give them their delectable flavour. Gulab Jamun can be found all over India, and are served everywhere from street stalls to fancy restaurants. 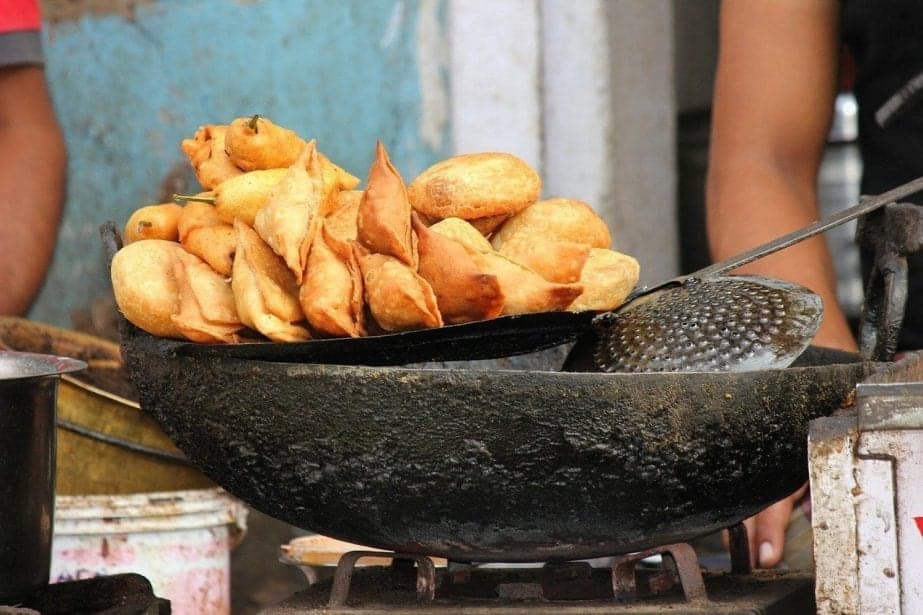 As one of the most well known Indian street foods, samosas are found in Indian restaurants across the globe. It’s no surprise then that they’re even better tasting in the Motherland herself, and available virtually everywhere. This triangular fried pastry is stuffed with a delicious spicy potato filling, and is commonly eaten as an appetizer or a snack- usually accompanied by a tasty sweet chutney.

No trip to India is complete without a lassi… or 12. Lassi is a sweet, creamy, yoghurt-based drink that perfectly complements any and all Indian spices. Lassis can be sweet, they can be salty, and at their best, they can even be mango flavoured. This popular drink can be found everywhere across the Subcontinent as it is one of the top Indian food items in the country. If you went to India and didn’t have a Lassi, did you really go to India? 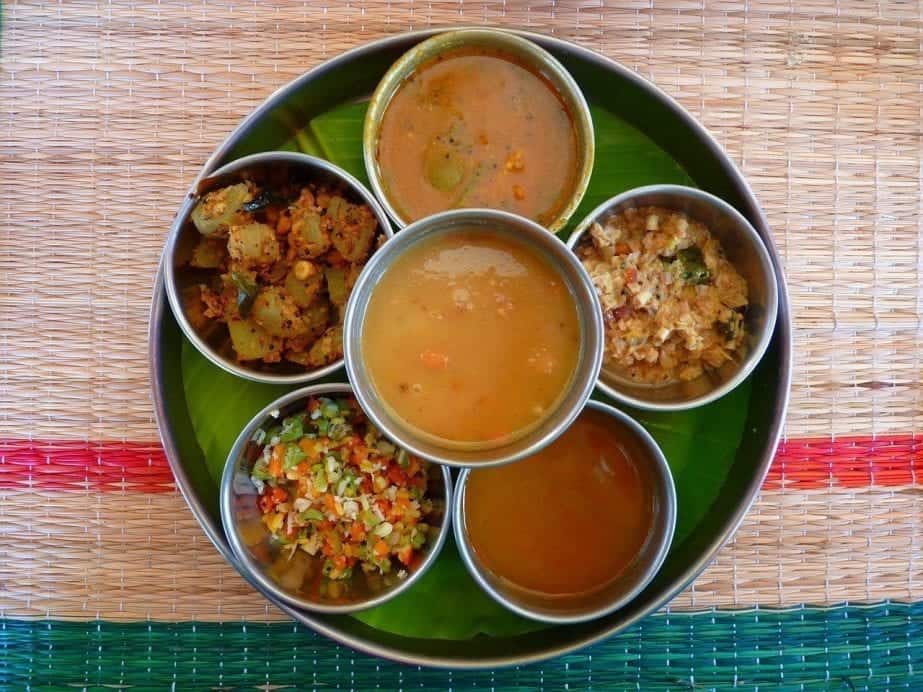 Perhaps the most foodie-friendly dish on this list, a Thali is not just one type of food but many. Thalis are large platters composed of many different type of Indian foods, which range from curries, to dals, to chapatis, to pickles and all kinds of veggies. Because of the variety thalis are the best Indian food option if you can’t make up your mind. Thalis can be found just about all over the country, with different states each having their own take on the meal. No matter where you visit in India, a thali is just one top Indian food you cannot miss!

Also known as Hilsa Curry, this dish is native to the lesser-visited Indian state of West Bengal, which borders Bangladesh. Fish is a staple in Bengalis’ diet, and they sure know how to add some flavour to it! Made with the Hilsa fish, this must-try West Indian food is spiced with turmeric powder, black cumin seeds, mustard oil, and green chillies, providing an explosion of flavour you can only find in this region.

Native to India’s Southeastern state of Tamil Nadu, Rasam is one of the most popular south Indian dishes. It is a tasty tamarind-based soup spiced through-and-through. An appetizer that can be either drank like a soup or poured over rice, Rasam is composed of tomatoes, peppers, and cumin seed. While its watery consistency might cause you to question its worth, rest assured that this little dish packs a big punch. If you find yourself in Tamil Nadu, soothe your throat and your taste buds with this local favourite. 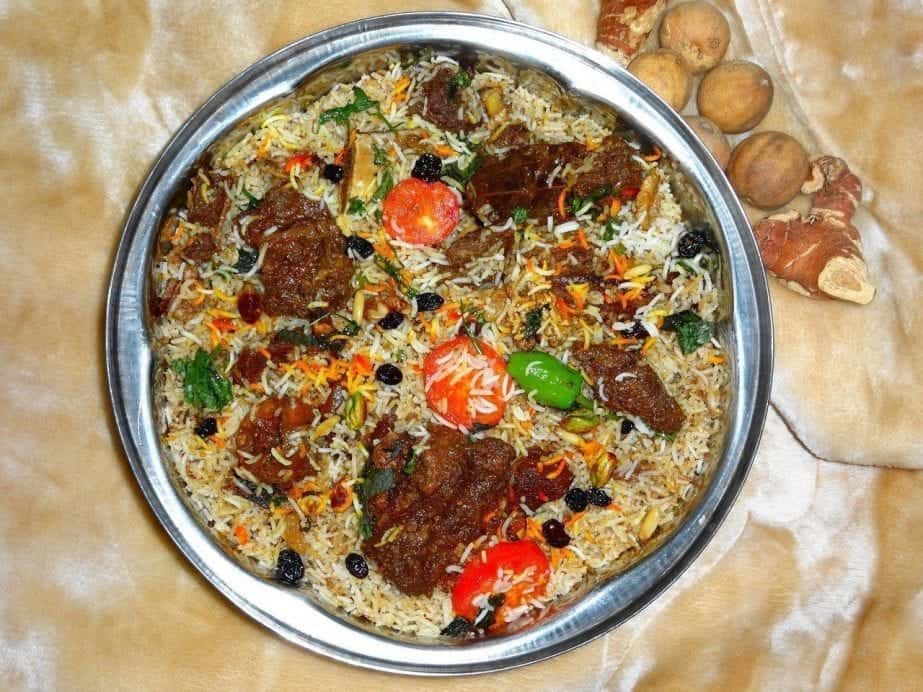 A mixed rice dish with origins from Pakistan, Biryani is also widely found across India and enjoys immense popularity in certain regions. Biryani is often served on a large plate and is filled with spices and usually some kind of meat, which can range from fish to goat and everything in between! While the Indian city of Hyderabad claims to have the best and most popular variety in the whole country, this filling meal can be found in many Indian cities including New Delhi and Kolkata.

A top Indian food from India’s Kashmir, Rogan Josh is a savoury spice-filled red curry that has become notable across many of the country’s states. The popular Indian dish consists of pieces of lamb or mutton braised with an aromatic gravy, though it can (rarely) be found made with beef as well. The dish is slow cooked to perfection and has been a longtime favourite in the Kashmiri diet – and for good reason. Expect to see this meal on many a menu!

While this might seem like a lot, this is but a small fraction of the thousands upon thousands of traditional and street foods you’ll find throughout India. Whether you love spices, sweets, meats or one of everything, you can rest assured that you’ll be able to find something to meet even your wildest culinary desires during your Subcontinental adventure. 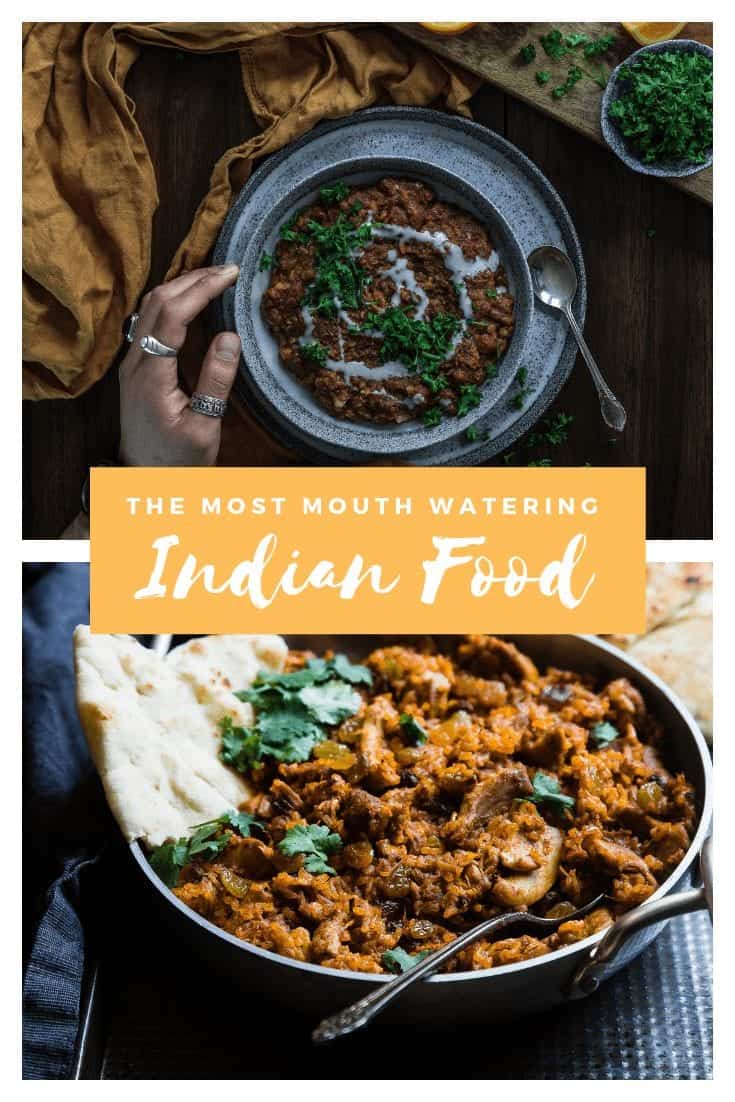 A Guide To Tel Aviv, Israel

A Guide To Goa, India

20 of the Best Jamaican Food You Must try