In April of last year, I decided to explore the undiscovered country of Albania. I only scheduled for a week in the south to explore some of the beaches, as I had heard through the grapevine that there were some incredible idyllic beaches, and I was craving some relaxation and some good ol’ beach time.

My original plan was to spend just a couple of nights in the city of Saranda and then go and explore some of the other coastal villages and towns, before a catching a flight to Turkey from Tirana ( the capital). As soon as reached Saranda I fell deeply in love. It’s crazy to think that was over a year ago and now I’m sitting in a rented apartment, applying for a longer visa and thinking to myself that this deep love affair with Albania started in this exact city. 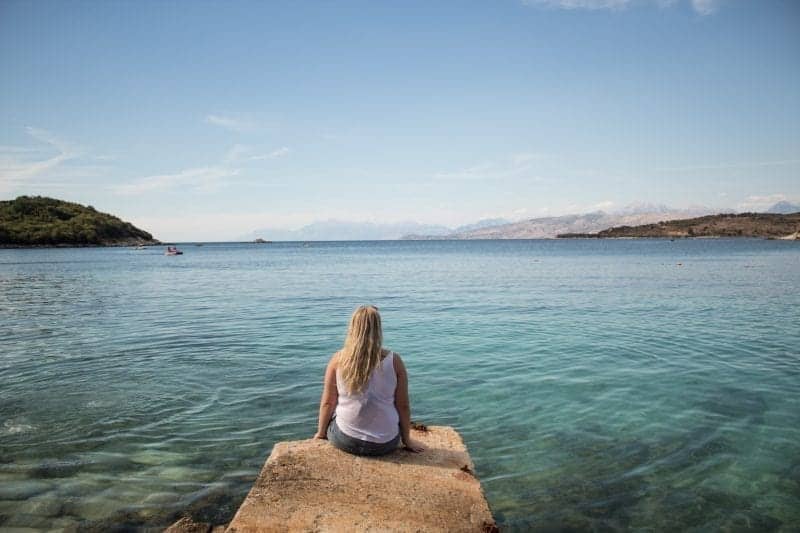 After I spent a week in Saranda last year I started to reevaluate my life a little, no, a lot. Full-time travel was amazing, but I was really craving having a base and so was my bank account. I spent all my time travelling back and forth from New Zealand to the United Kingdom because my ex-boyfriend was British, and it was starting to take a toll on myself and my poor bank account.

I remember sitting in Tirana airport in April of last year, tears streaming down my face, not wanting to leave Albania and telling myself that I would 100% be back here. I didn’t know when or how but I promised not only myself that but my new friends I had made here. If you know anything about me, you will know that I’m determined and when I set my mind to do something there’s no way that you can change that.

In the following few months of leaving Albania, all I could think about was coming back. My boyfriend and I decided that it wasn’t working, and we would be better as friends. Long distance is doable but sometimes it just gets too hard and life pulls you in other directions. I decided after the break up that it was a sign for me that I needed to stay in Albania. I had planned to visit for a couple of weeks but at that moment I decided that I was going to spend the summer there and just see what happens.

It was the most unforgettable summer I have ever had in my life for many reasons. Albania just felt like home. I felt comfortable here and I had made some lifelong friends in this exact city.

At this current moment I have nearly been back in Albania for 3 months, I have adopted a street dog (and as I write this he’s having the craziest dream, he’s so cute, I’m getting distracted by his cuteness ahhhh) and I’m getting into a good everyday routine Although I’m a little stressed with getting this long-term visa (I will write a full blog post about my experience once it’s all over!) its safe to say Albania has been the deepest love affair I have ever had.

30 of the Best Places to Visit in Greece