10 Things to Do in Brasov, Romania

About two hours north of Bucharest, Brasov (that’s Brash-ov) was always high on my “must see” list for Romania. Like many people, it was the appeal of visiting Transylvania – synonymous with Dracula and vampires – that first intrigued me, but the more I read about Brasov, the more I knew I had to visit.

I love a good Medieval city and one that’s famous for literature and vampires is particularly up my alley. In the end, three days in the city became five, when I realised there were so many amazing things to do in Brasov. Here are my favourites.

Let’s start with the big-ticket item first. Bran Castle, also known as Dracula’s Castle, is one of Romania’s most popular tourist attractions and certainly, one of the must-dos in Brasov. The castle is actually located in Bran (hence the name), rather than Brasov, but it’s only about forty-five minutes away on the bus. Or, you’ll find pretty much every hotel, hostel and tourist agency selling tickets for tours to Bran and the other nearby castles.

Bran Castle is famously known as ‘Dracula’s Castle’ and is said by some to have been the home of Dracula. Those familiar with the story of Dracula are likely already sceptical, considering the inconvenient fact that Dracula is a fictional character. In fact, the link is even more tenuous – there’s actually no evidence Dracula’s author, Bram Stoker, even knew the castle existed, however, it’s the only castle that fits the description in the book. Plus, it sure does look like the kind of place where a thousand-year-old vampire might be sleeping in his coffin!

Aside from stories of things that go bump in the night, Peles Castle was my other big draw to Brasov. It’s widely regarded as one of the most beautiful castles in all of Europe (and we all know there are some very beautiful castles in Europe) and it is truly stunning, nestled in the Carpathian Mountains near Sinaia. From the outside, it has amazing Neogothic good looks, while the inside is filled with breathtaking chandeliers and artworks.

Or, so I hear. Sadly, during my visit the Castle was actually closed to visitors due to some pesky visiting dignitaries. Unfortunately, this meant I wasn’t actually able to go inside the Castle or get up close, although just looking at it from afar was pretty special. It’s definitely well worth a trip, as not only is the castle beautiful, but the surrounding villa of Sinaia is also very picturesque. 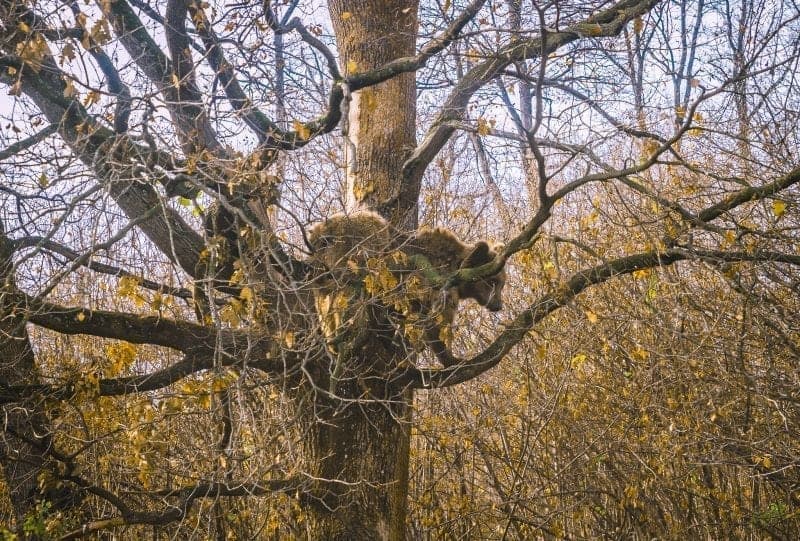 A little-known fact about Romania is that the country is home to more brown bears than any other country in Europe, except Russia. Having never been anywhere near a bear, I hoped I’d have the opportunity to spot one in person, and after some research, I found the Libearty Bear Sanctuary. I was nervous at first, as unfortunately not all “sanctuaries” are truly ethical, so I did a lot more research on Libearty and found it has been named as one of the three most ethical animal sanctuaries in the world by National Geographic.

After my research, I felt comfortable visiting, and I am glad I did! All of the bears have been rescued from pretty terrible circumstances, but are now getting a chance to live out their days in safety. There’s over 70 hectares of space for them to explore, and the sanctuary only opens for a couple of hours a day for a guided tour. It’s up to the bears whether they come up to you (behind a fence, obviously!) but a few of them are quite curious, so I got to see many up close. It’s a great experience that I’d highly recommend as one of the top things to do in Brasov.

#4: Try some Romanian wine at Tipografica

It seems to me that Romanian wine doesn’t get the kudos it deserves! Whether you enjoy white or red, there are some great (and affordable) varieties produced in Romania. In particular, the red Fetească Negră or the white Fetească Albă are delicious, and found in most bars all around Brasov.

There are many great restaurants and bars in Brasov, however my favourite was the stylish yet laidback Tipografica. A café by day, at night it transforms into a cozy wine bar with friendly staff who are happy to talk you through Romania’s best-known vinos. Of course, if you’re not a fan of wine, then there’s also other drinks of choice, including the traditional (and somewhat intense) tuica spirit. Just go easy on the tuica, as it’s got quite a kick! 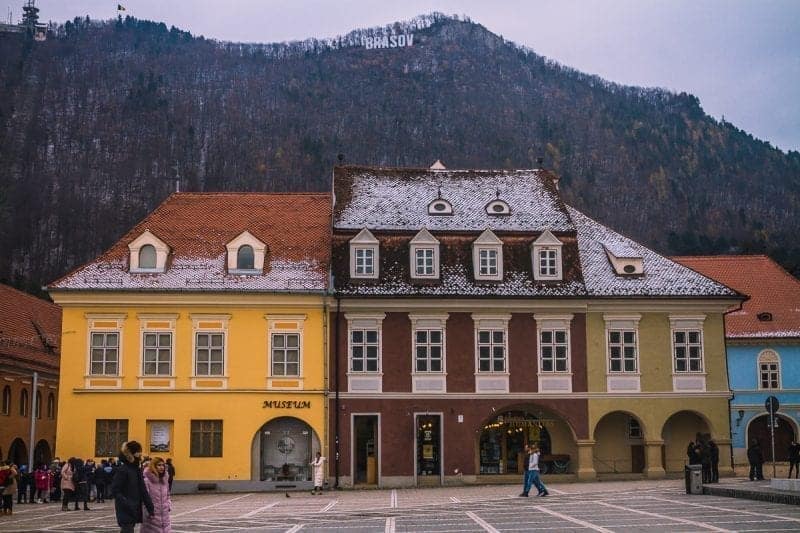 I can’t say I was expecting to find a huge Hollywood-esque sign in the middle of Transylvania, but it’s one of the most recognisable landmarks of Brasov! In fact, most locals will tell you that there’s is even better than the Californian version, because theirs lights up and can be seen all day and all night. I tried to stay out of that debate, but it is a great sight!

One of the most popular things to do in Brasov is to hike to the sign – it takes about two hours in total, and from the top, you get a great view if the day is clear. Just stick to the paths, as bears and wolves live in the general area (seriously). If the bears, wolves or two-hour walk turns you off, then the other option is to catch the cable car to the top and enjoy the great view without the wild animals or sore legs.

For something a bit offbeat and different in Brasov, find “Strada Sforii”, also known as the narrowest street in Eastern Europe. Apparently, when Brasov was first built, the little laneway was constructed so that fire fighters would be able to easily pass through the city. However, it became more popular with lovers who would meet secretly in the laneway, especially if their families disapproved of their union.

Today, it’s no longer needed for fire-fighting, but it is a popular tourist attraction in the city. At the end of it, you’ll find a museum and café where you can get a delicious hot chocolate and learn a bit about the history of Strada Sforii, also known as Rope Street (thanks to the ropemaker’s guild that was nearby). If you want to snap some photos, be prepared to be patient, as it’s a narrow walkway with plenty of foot traffic!

#7: Pass the time in Piata Sfatului

Like many Medieval cities around the work, Brasov was constructed around a large, open square that housed the main council buildings as well as other important properties. Over time, that square has had many uses – grimly, public executions were held there during the days of Vlad the Impaler, while a more wholesome use of the square was as a bustling produce market.

During the Communist era, however, Piata Sfatului was turned into a carpark, largely to prevent people from gathering or demonstrating against the Government. As such, it was a point of pride and joy when the square was reopened to the public. Today, it is a bustling place where people meet and gather to enjoy food or do some shopping. It’s a great place to spend an afternoon or evening, and definitely shouldn’t be missed while you’re in Brasov!

#8: Venture beyond Catherine’s Gate to the Schei Area

For about 400 years from the 1300s, Brasov was under the control of the Saxons, who, overall, treated Romanians pretty terribly. One of their rules was that Romanians were not permitted to live within the fortified walls of Brasov, but instead had to live in the area beyond it, known as the Schei District. As such, this area built up with quite a different cultural feel to the city inside the walls.

It’s well worth spending some time exploring the Schei District, and especially paying a visit to the beautiful St Nicholas Orthodox Church and the museum next door. The Church has many interesting artefacts including beautiful old books – many which were saved from destruction in the Communist era by the church’s priest, who bricked them up inside the church’s towers to keep them safe. Today, some of them are on display at the Church and the museum. 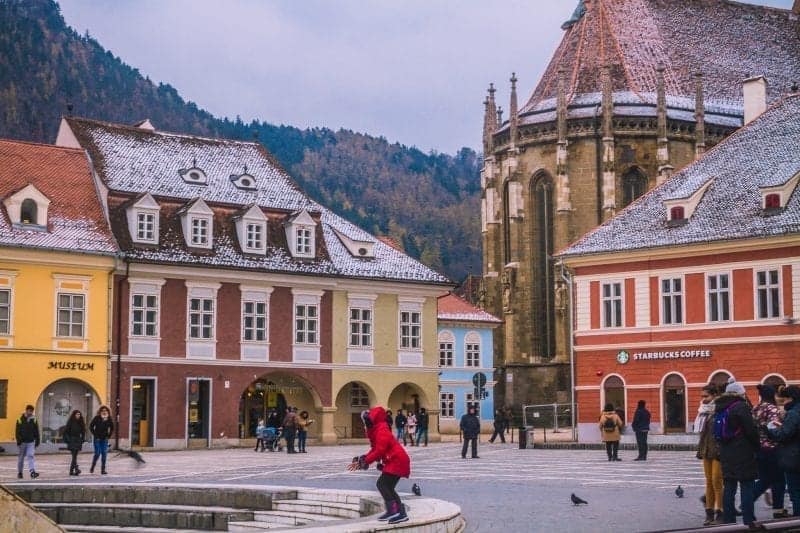 Another of the most popular things to do in Brasov is to visit the Black Church, which is just off of Piata Sfatului. The Church is incredibly beautiful and dramatic, not only because it is the largest Gothic church in Eastern Europe, but because of the singed black tint of its walls, thanks to a fire in 1626. Although the fire did a lot of damage to the Church, it remained standing, and many of the beautiful paintings inside were also spared and are still on display.

One of the most interesting features of the Black Church is the large collection of Ottoman Anatolian carpets inside. Many groups have come and go from Brasov – and Romania as a whole – and each have left a mark on the country and its cities. The Black Church is a microcosm of this, which makes it a very interesting place to visit in Brasov.

#10: Go on the free walking tour of the city

Brasov is such a fascinating city where every building seems to have a hidden (and often slightly macabre) history. From details of the brutal regime of Vlad the Impaler, to legends about vampires (or their sort-of equivalent in Romanian folklore) and resistance during the Communist era, there is so much to discover in Brasov. Plus, the streets are so pretty, with their pastel facades and intricate architecture.

That’s what makes Brasov such a good candidate to discover on foot. I love a good walking tour anywhere, but the free one in Brasov was one of my favourites. The “Walkabout” tour runs every day, although the time does change a little depending on the time of year. If you’re not a fan of group tours, you can always make up your own itinerary – don’t forget to leave plenty of time to stop and just enjoy the great atmosphere of this beautiful city.

Author: Georgie Mack is an Australian travel blogger currently living in England. She loves travel that’s good for your wallet and good for the earth. You can follow her adventures in travelling and wine drinking at @journeywithgeorgie 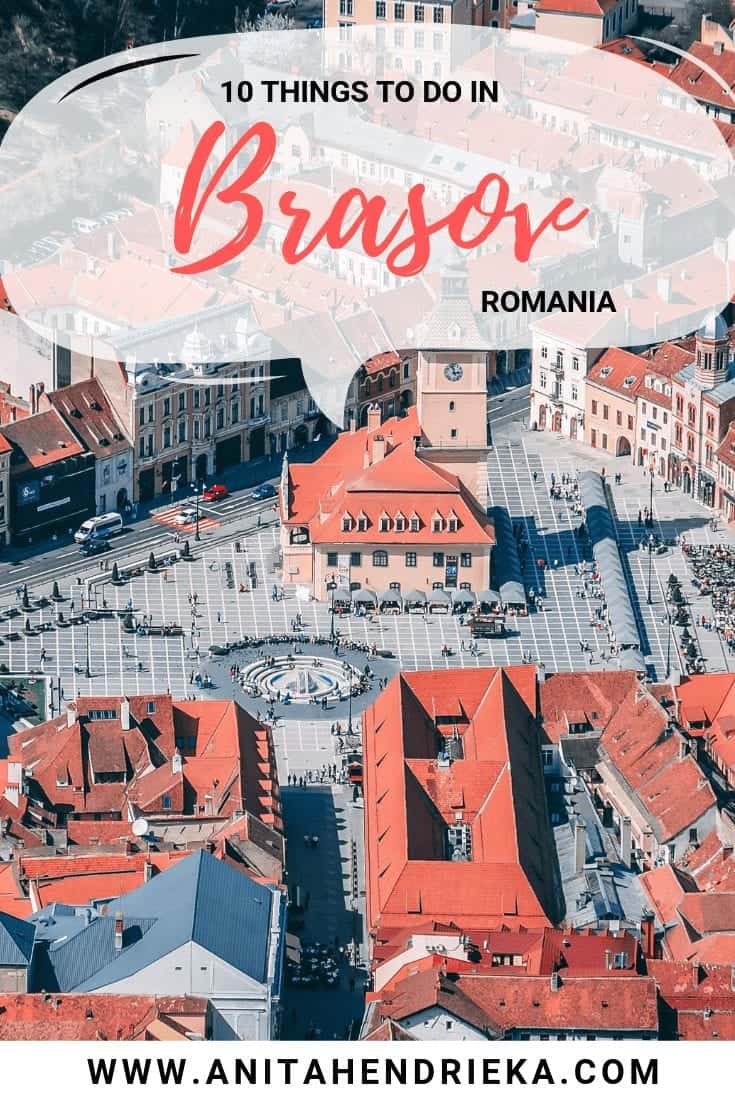 The Best Destinations for a Holiday with Friends

Travel to Australia and Work as a Nurse!

9 Secrets To Save Big On Car And Campervan Hire

25 Weird and Interesting Facts about Japan