Greek food is synonymous with flavour, good nutrition and good times especially given it is often enjoyed with groups of family and friends. This reputation is well deserved, too, because there are so many delicious traditional Greek dishes! Plus when it comes to Mediterranean food, Greek cuisine is probably the most well known worldwide.

The Greeks are known for their generosity and hospitality and it’s not uncommon to be given huge servings when travelling through their beautiful country and dining in their tavernas. Usually at very good prices too.

A lot of traditional food in Greece has evolved over centuries and come from times of conflict and occupation, and often great hardship. A lot of recipes from Western Greece have a strong Italian influence and likewise the Ottoman influence in the East.

Some traditional Greek dishes are quite simple and have few ingredients which came about simply as they were the only things in season or on hand at the time. Some Greek meals are very seasonal – baked dishes and casseroles, for example, are mostly made in Winter and Autumn. On the islands, seafood is very popular.

Even today the emphasis is on fresh food and very little in Greece is frozen or imported. This often means there can be a lot of variation in one single dish as it may be made with whatever produce is on hand at the time. Some taverna’s don’t have menus and operate purely with whatever the kitchen has made on the day.

Whichever part of Greece you visit these 10 traditional Greek appetizers, snacks and meals are guaranteed to leave you satisfied.

Greek cooks have always been very good at making a little meat go a long way. Pastitsio is one of their most popular pasta dishes and is the Greek equivalent of Lasagna. It is often made with Penne pasta but traditionally large hollow tubes called Ziti were used and often still are. There are a lot more cinnamon, less tomato paste and a lot more béchamel than Lasagna.

It is best eaten a few hours after baking when it is still warm in the tray and has firmly set. As is typical of Greek food, Pastitsio can be found all over the country, and is sure to fill you up – and keep you coming back for more! 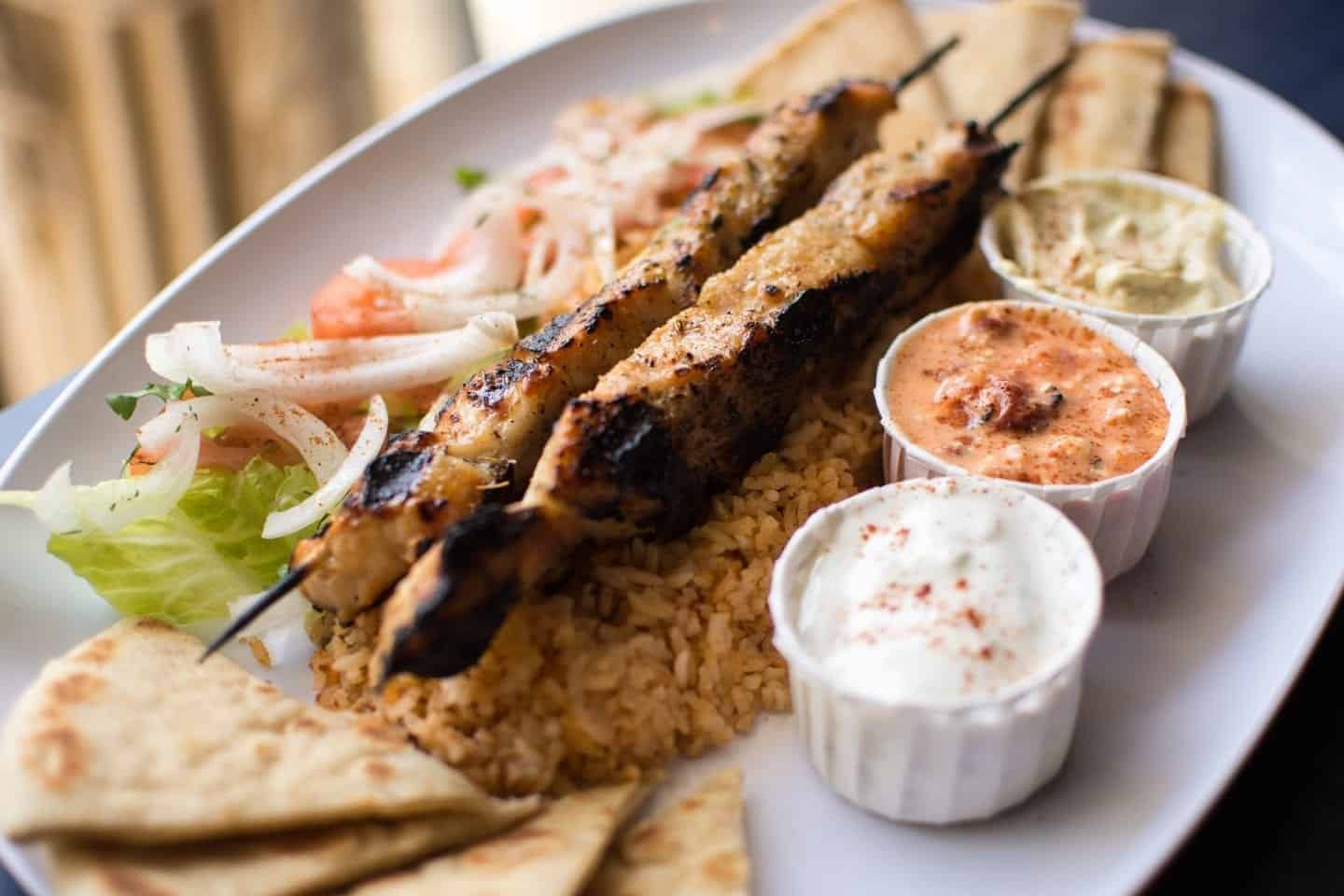 2. Souvlakia and Gyros – one of my personal favourite Greek dishes!

This popular Greek street food is found everywhere in Greece and has changed little in thousands of years. It was originally introduced to Greece by the Turks after World War II and in fact the words Gyros and Donor (as in Donor Kebab) mean ‘turn’, as in the huge turning skewer they are cooked on.

Souvlaki is very similar to Gyros (Yiros) but the meat – lamb, pork or chicken – is cooked and served on its own small skewers. It is usually accompanied by dips/yoghurt, flatbread and salad. For Gyros the meat and salad are wrapped in a lightly grilled flatbread, often with potato fries as well as garlic sauce or Tzatziki yoghurt dip.

This is arguably the best Greek food there is! So if you’re visiting and hoping to try out any traditional Greek food, it is pretty impossible to avoid having souvlaki or Gyros for at least one of your Greek meals while you’re there!

the best accommodation in athens 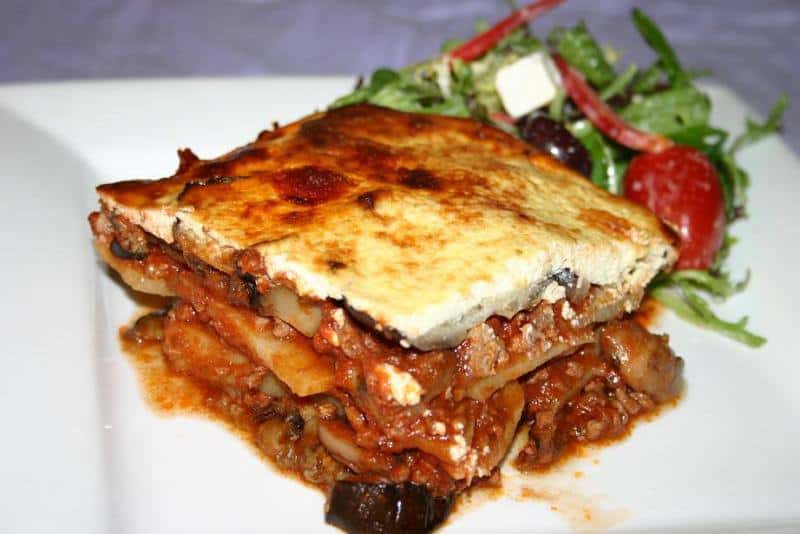 Another staple of Greek cuisine is Moussaka. This incredibly popular Greek food is made from meat and vegetables and has a number of variations. It generally contains sliced eggplant but may also have zucchini and/or sliced potato as well, with mashed potato and/or cheese on top of creamy béchamel sauce.

Moussaka is very popular in Mediterranean food. You will find similar dishes to this traditional Greek dish throughout the Balkan states and the Middle East as well. 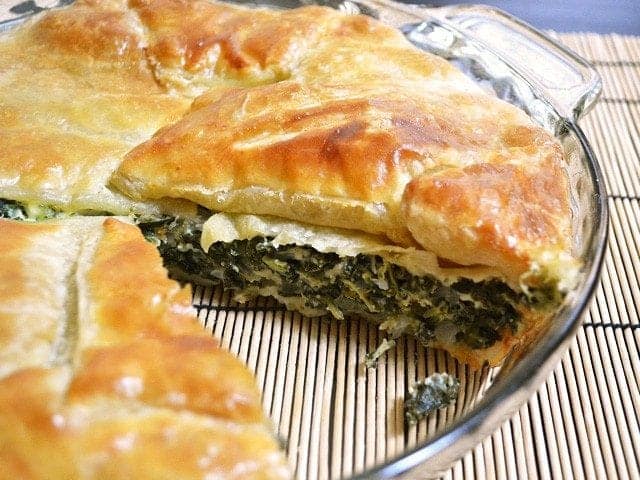 4. Spanikopita – One of the most tasty traditional greek recipes

Spanikopita is commonly known as ‘cheese and spinach pie’ to non-Greeks. But this beloved dish is one of the most popular Greek snacks available. Made with eggs, onions, cheese, dill and crispy filo pastry. It often comes as one big pie served by the slice or you can buy small individual ones which also make a great snack.

If spinach is not readily available they might substitute another leafy green such as Horta, a plant that grows wild on many islands.

Like Moussaka, variations of Spanikopita are very popular not only in Greece, but in most Mediterranean food!

‘Dolma’ is a family of stuffed Greek dishes found across the Mediterranean. There are many variations – stuffed tomatoes, capsicum, zucchini, pasta, calamari and cabbage rolls but one of the best known and widely exported around the world is Dolmades.

Dolmades is vine leaves stuffed with meat, rice, dill and mint. There are now many tinned versions that are readily available and most are pretty good but fresh Dolmades are still found in abundance and are often served as one of the Greek entrees along with yoghurt. 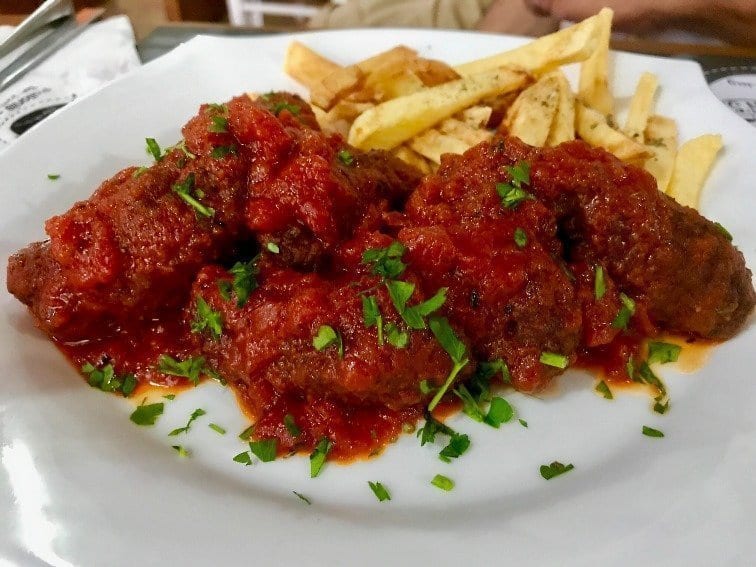 This traditional Greek dish is pronounced ‘Zoo-zoo-gark-ia’. It consists of oblong-shaped meatballs mixed with a rich sauce made from cumin, cinnamon, and garlic served in a rich tomato sauce.

As with many Greek appetizers, soutzoukakia can be served as a side dish, or as part of a larger meal. They are are generally served with a small pasta such as pilafi or risoni, or rice. 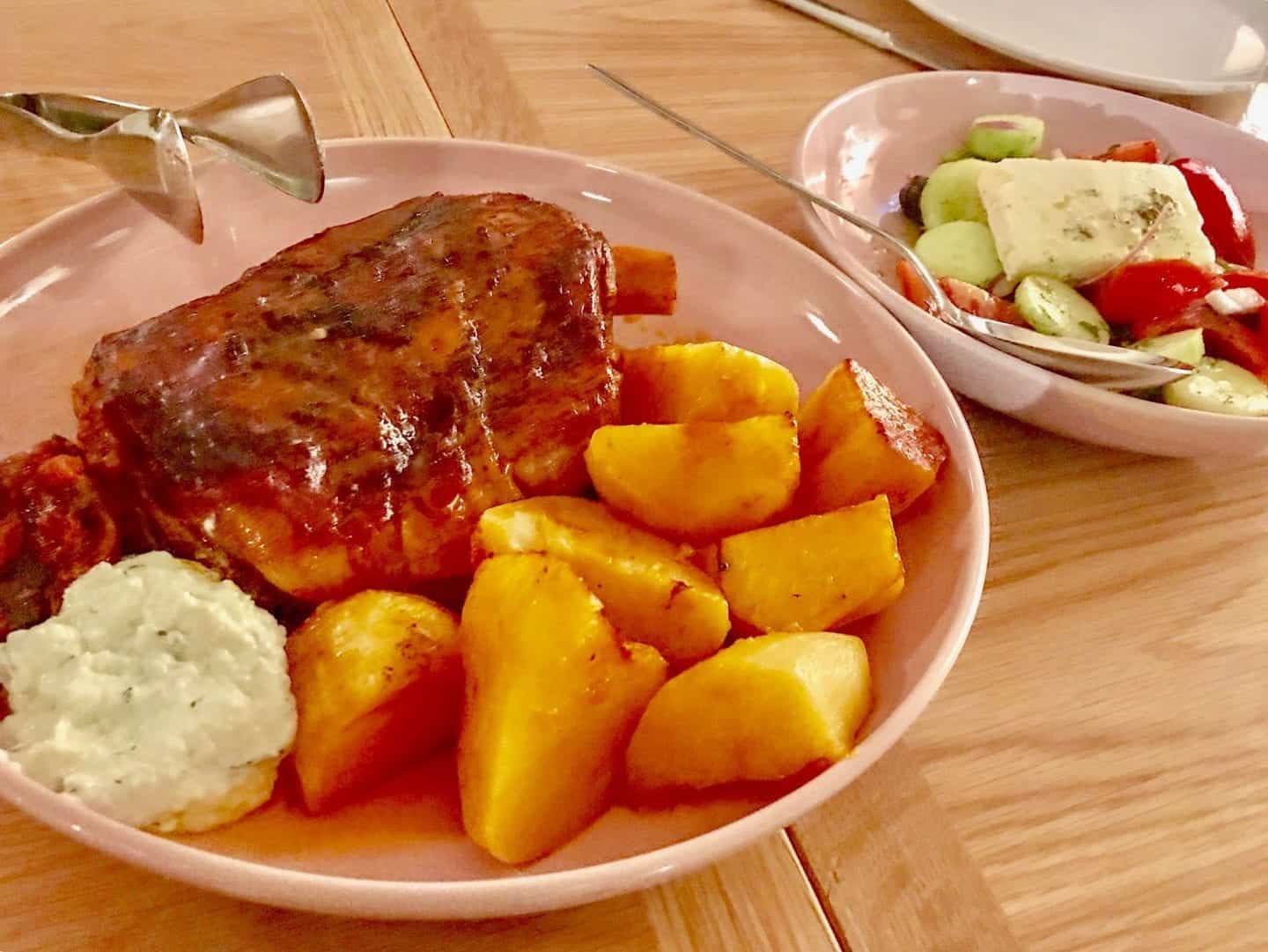 One of the best greek dishes to try at lunch or dinner time!

It’s a bit of a myth that typical Greek food involves a lot of lamb. Whilst that may have been the case once upon a time for Homer’s soldiers after a battle, these days sheep are hard to come by with little grazing land available, especially on the islands. The terrain in much of Greece is better suited to goats and this is readily eaten, as is pork, which is probably the most commonly eaten meat today.

Greeks also like to eat their meat well done. But to tenderise it is cooked very slowly, often over hot coals or in the ground. In a small suburban kitchen, it would be cooked on low in the oven and tightly covered to allow the condensation to tenderise the meat.

That said you can still see lamb on many menus or at least ‘ Souvla’ (skewer) which is a well-loved Greek meal, and worth ordering. Lamb chops are also a very popular food in Greece, and a quick and easy meal. One of the best accompaniment’s to slow-cooked lamb is lemon potatoes that are often cooked in the lamb juices and have a nice zingy contrast to the meat.

the best accommodation in greece

These little cheese pies are sold by street vendors and bakeries particularly in Corfu and the other Ionian islands.

Tiropita is one of the most popular Greek snacks, and there are many variations across the country which mostly has to do with the pastry. For example, in the Sporades islands, the cheese filled pastry is often formed into a spiral whilst in the Ioanians they are individual triangles.

They make a great snack and are often sold in bakeries and eaten for breakfast too. The Tiropita is one of the top authentic greek dishes you definitely need to try on your travels. 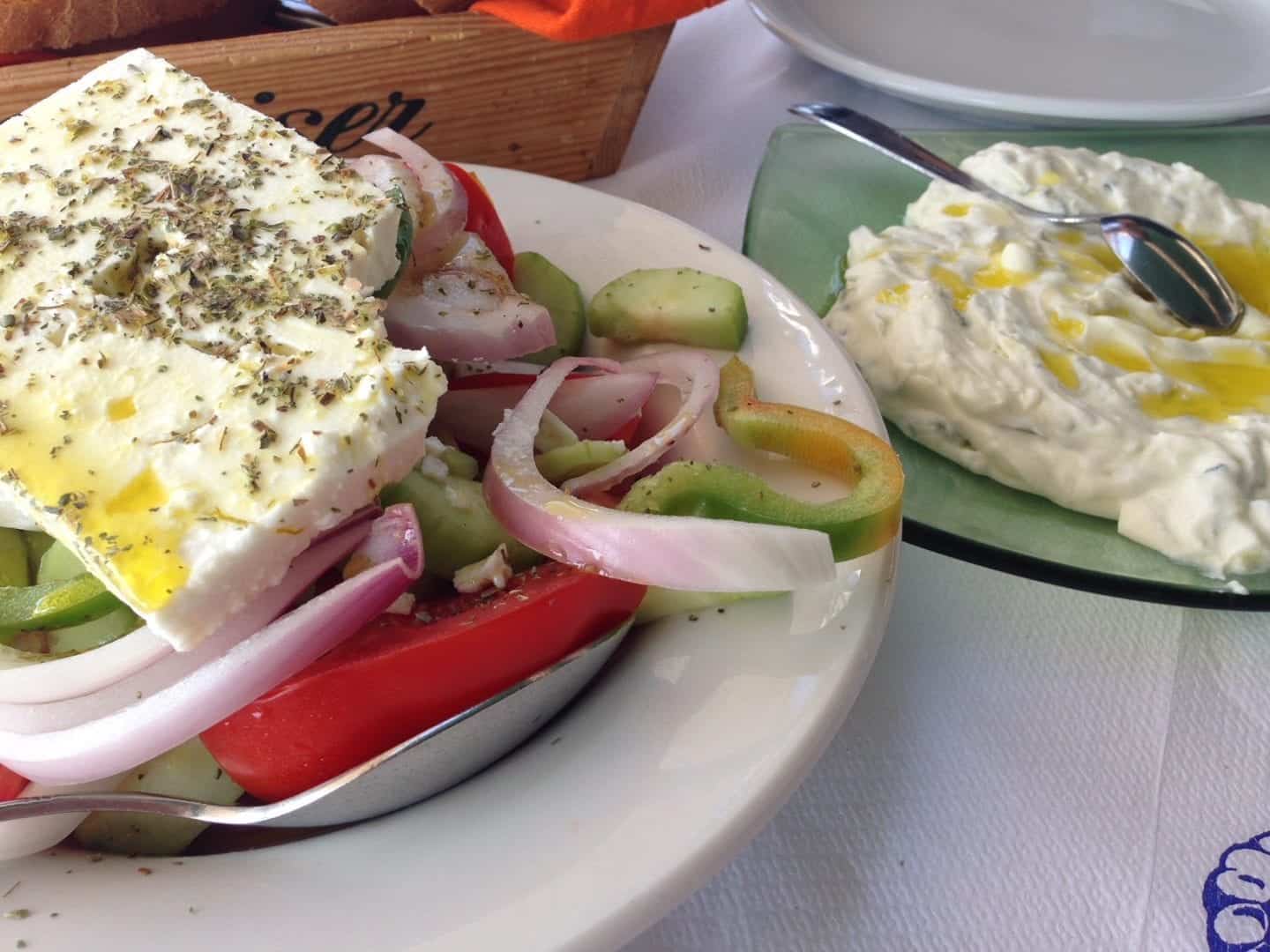 The greek salad has to be dubbed one of the most famous Greek dishes there is!

Known in Greece as Horiatiki this salad is one of the most popular Greek dishes and best known in the world. It’s so popular, many people just think of Greek salad when they think of Greek cuisine!

Made with tomatoes, cucumber, onion, feta cheese and olives and drizzled with olive oil and lemon juice, there can be many variations from island to island and region to region or often simply due to what was available on the day.

Variations can include capsicum, lettuce, capers and in Crete it is served with or on top of dried bread and is called Dakos. Sometimes you may get just tomatoes and feta cheese with some oil and herbs. Whichever way you get it, this popular Greek food will be fresh and full of flavour especially in summer when the vine-ripened tomatoes are bursting with deliciousness.

Even if you’re not interested in trying traditional Greek dishes, it will be hard to avoid this one!

You need to add this to your list of must-try greek food recipes!

These tasty Greek snacks are deep-fried balls of dough traditionally covered in honey and cinnamon or icing sugar and often known as ‘honey puffs’. Loukoumades are also now popular covered in many things such as chocolate sauce, Nutella, caramel and many other wicked delights.

You can often find them sold by street vendors or at small Loukamades shops where they are best eaten fresh and warm. This makes them a popular late-night snack on the way home from a night out.

There are so many amazing traditional Greek dishes to try in Greece. Greek food (or Mediterranean food in general) is one of those rare cuisines that you could probably eat every day and never get tired of it.

It’s comforting food and full of goodness too, which is why the ‘Mediterranean diet’ is considered one of the healthiest in the world. And the best part of all is that most traditional greek dishes are very affordable! 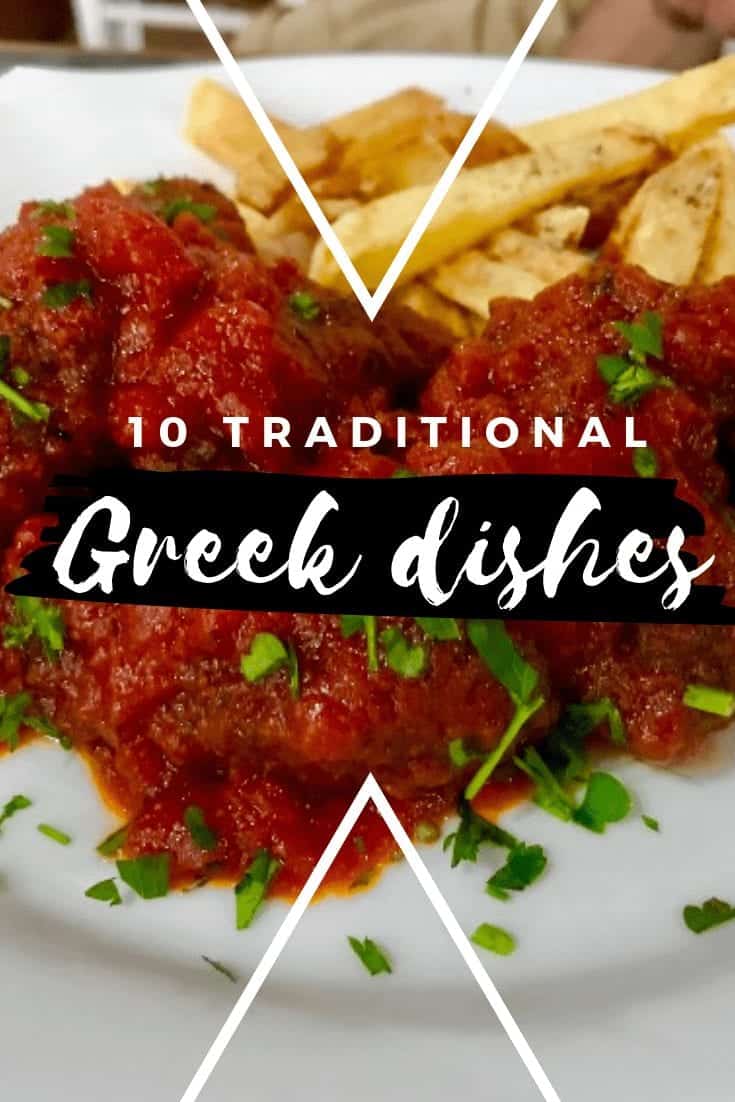 23 Remarkable Things To Do in Turkey!

Why You Should Experience Nightlife in Medellin