Varanasi – The City In India That Captured My Heart

Known as the spiritual capital of India, Varanasi is not to be missed if you’re heading to that part of the country.  It was more confronting than any other place I have visited in my life, but I found myself not wanting to leave after spending 5 nights there.  After my nightmare in Delhi, I was willing to give India a fresh start and I didn’t regret it.

I already had accommodation booked before arriving in India.  I stayed in a guest house because it was cheap and I wanted to have a more personal experience than just staying in any old hostel, although the room was technically a hostel as it had 4 beds, I was the only person staying in the room for the entire time I was there.  The guest house was run by a lady called Sona and her family who live downstairs.  She was very helpful and told me a lot about the area.  Okay, this place isn’t a luxury place to stay but most places in India aren’t.  If you want the experience of getting to know an Indian family then head here.  She also offers cooking classes and she can also organise any tours you want to do. 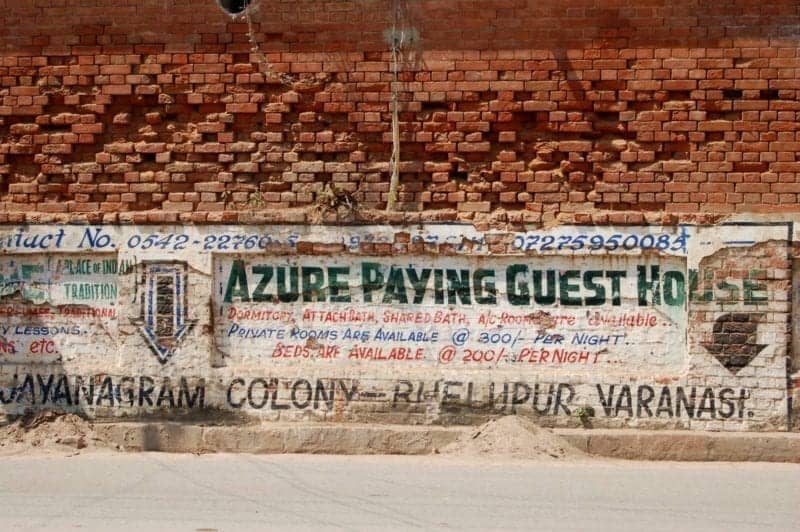 The Guest House was situated in the residential area which was a nice change from the bustling streets of Varanasi.  It took about 10 minutes walk to reach the Ghats, and from there you could steer right towards to the Assi ghat or left, to the Dasaswamedh Ghat.   Most people stay right on the edge of the River Ganges but I found this place was the perfect location because it was away from the noise and constant buzzing of the streets.  I also felt relatively safe because it is a residential area it has a guard on watch.  I wouldn’t advise catching a tuk-tuk in the dark by yourself however, you should never do this anywhere in India.

5 days is probably more than every other traveller spends in Varanasi but I don’t like to rush my travels.  Especially since I am a travel blogger and I like to really get to know a city rather than rushing around to check everything off a to-do list.  I am so glad I actually took the time to really take in this city.  I think if I was to stay only a couple of days I would have hated it.  It’s noisy and very confronting.   It was probably the dirtiest and smelliest place I have been to in India with a lot of dead things floating in front of you e.g. dead bodies, dead animals, rubbish, faeces – everything disgusting you can think of, it could be found here. 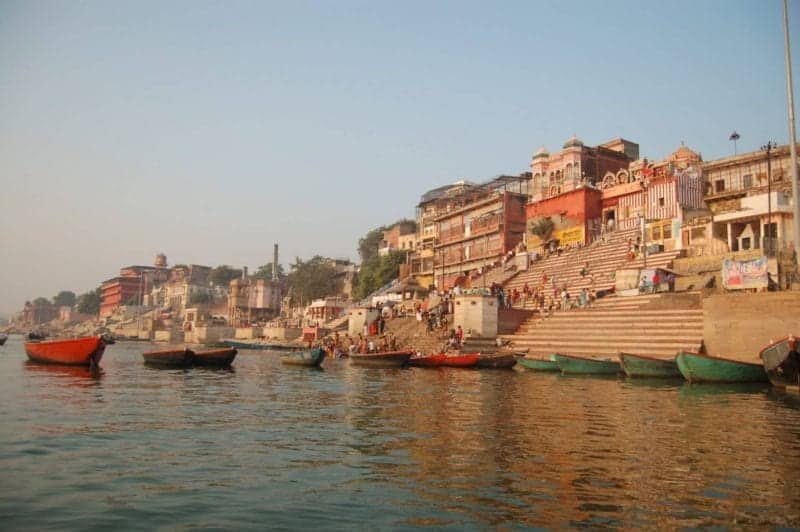 I had a special moment in Varanasi.  It was the first day in fact and I found myself sitting on the edge of one of the ghats looking over the Ganges.  I burst into tears of happiness.  I just couldn’t believe that I was sitting in the place that I had always wanted to visit and that I managed to get myself here.  When you’re travelling, these times are some of the best and one of the reasons I love to travel so I can search for these moments.  It was such a calm place although there were funeral ceremonies going on around me and people crying, people starving, dead bodies burning, people shouting, people laughing and people staring. 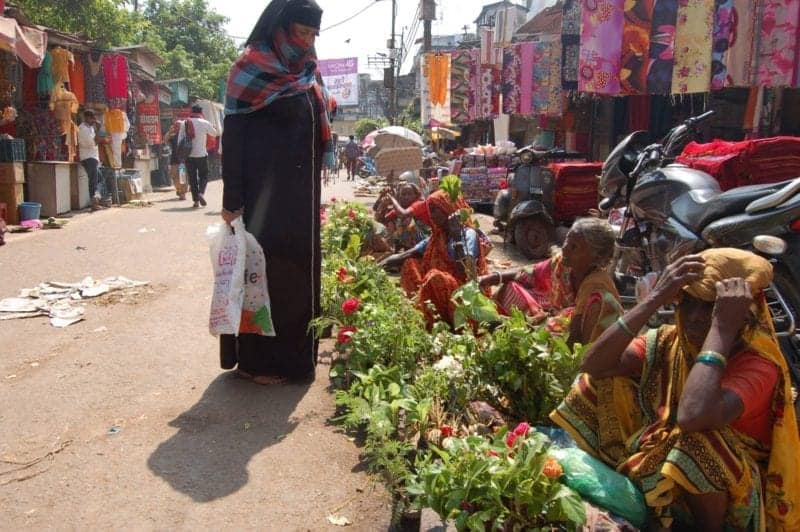 I practically ate my way around Varanasi with a range of Indian and non-Indian food, as it’s quite hard to completely change to an Indian diet if that’s not what you’re used to.  The first place I found was called Kerala Cafe which is a restaurant that specialises in dosas.  It is located on Bhelupura Crossing.  It is famous with the locals as it does the BEST dosa in the city.  It is also very cheap, you can grab one for 45 Rupees!  A dosa is a very thin crispy pancake which is usually served with sambar (vegetable stew) and various chutneys.  I loved the masala dosa which is filled with delicious potato filling! Although this is actually a south Indian dish I definitely recommend you try it!

Another great place to eat if you want a change in food is called Megu Café which is a Japanese restaurant that does a delicious miso soup.  If you’re vegan then make sure you head to a little shop called Vegan & Raw which is situated in the less touristy part of Varanasi.  I highly recommend the walnut sauce pasta and the carrot and ginger juice!

Make sure you take the time to:

Varanasi is known to be the soul of India, it’s where the nation come to die.  According to the legend, the God Shiva discovered Varanasi so you will find a huge percentage of people here are Hindu.  Cremations are an extremely important ritual to the Hindu culture.  To be cremated is to be reborn.  If the ritual is not done properly the spirit will get lost and never find its way to the afterlife.  The ritual is ideally done 12 hours after death and at the latest, 24 hours.  One of the main reasons why Hindus want a son in their family is because only sons can be responsible for the torching of the body. 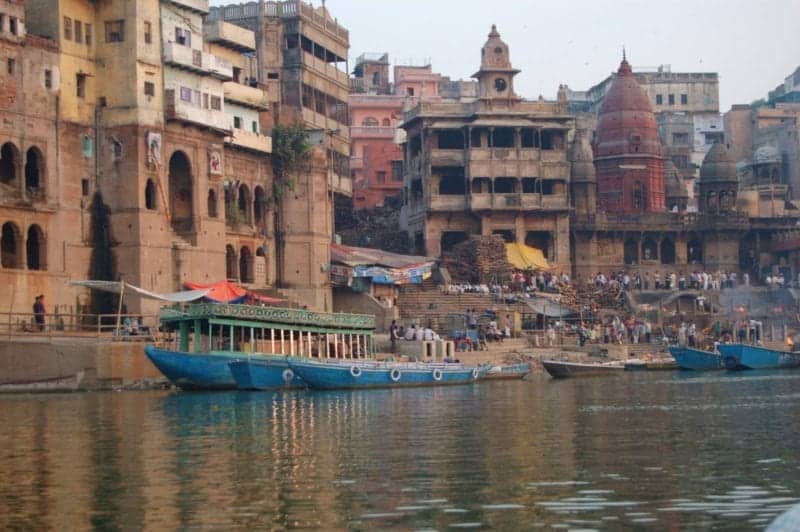 The burning ghats from a distance

It’s not at all like a western funeral in the fact that you will not see as much sadness but more showing signs of respect as they believe that the soul never dies.  Traditionally, women are not allowed at the cremation as they might show signs of sadness and cry during the burning.  They help with the preparation of the body which is washing and wrapping the body in a plain sheet.  Married women are dressed in their wedding dress wrapped in an orange shroud.  If you see a red shroud then that person is considered holy.  The family and any neighbours are not allowed to eat or drink when the body is in the house out of respect to the dead.

Once the body is ready then the men will carry the body out on bamboo decorated with flowers and head to one of the burning ghats – Manikarnika and Harishchandra.  You will hear them chanting “Rama nama satya hai” which translates to “The name of Rama is the truth”.   Lord Rama is the God of truth in Hindu religion.  Once the family have reached the ghat the body will then be placed on a pile of wood.  Depending how rich the family is depends what kind of wood will be used in the ceremony.   If they are wealthy usually sandalwood will be used for the burning.  If you do watch the ceremony you may be asked if you would like to buy wood for the family to use.  Some men will also claim to give you a great view of the ceremony and that money will supposedly be used for the family to buy wood but sometimes it can just be scam so be weary.  I never took up any offers of any great views, I just simply sat on the steps and watched from where I was comfortable, until a goat just about knocked me out (I will tell that story another time).  The ceremony will start at the beginning of the day because the body should be ash by sunset.  The men who set up the wood piles can calculate the exact time the body will be ash using the correct amount of wood.  How they do this I have no idea.  I’m not sure it’s a skill I would want to learn but kudos to them! 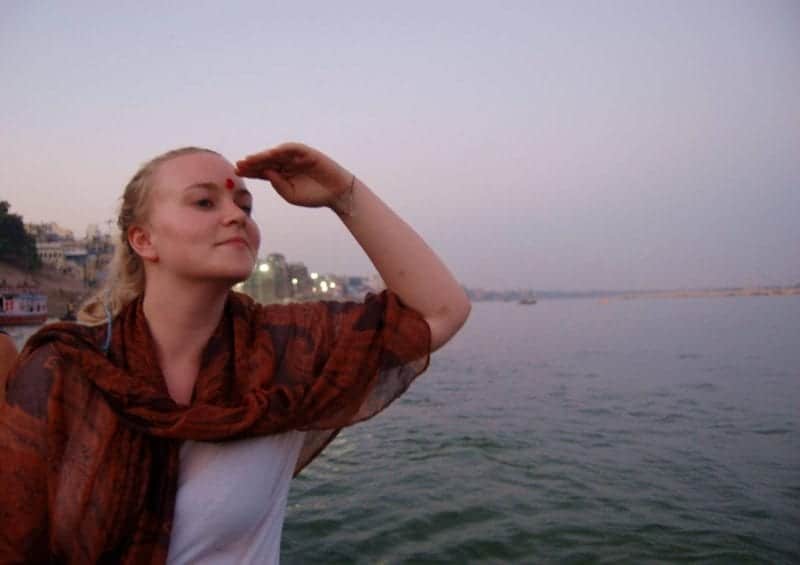 I met a lot of people who had a deep connection with the city despite it being the smelliest place EVER.  I dare you to visit for a week and I promise you, you won’t be disappointed.   Make sure you read my article on 5 things to take with you to India and read if India REALLY changed me.  Let me know your experiences in Varanasi if you have been and please leave any questions you have below!

How Travelling on a Budget Will Make You Happier

I'm a fun-loving blogger and coach from New Zealand, living in the south of Albania!