The Best Things to do in Samoa + Food & Accommodation! 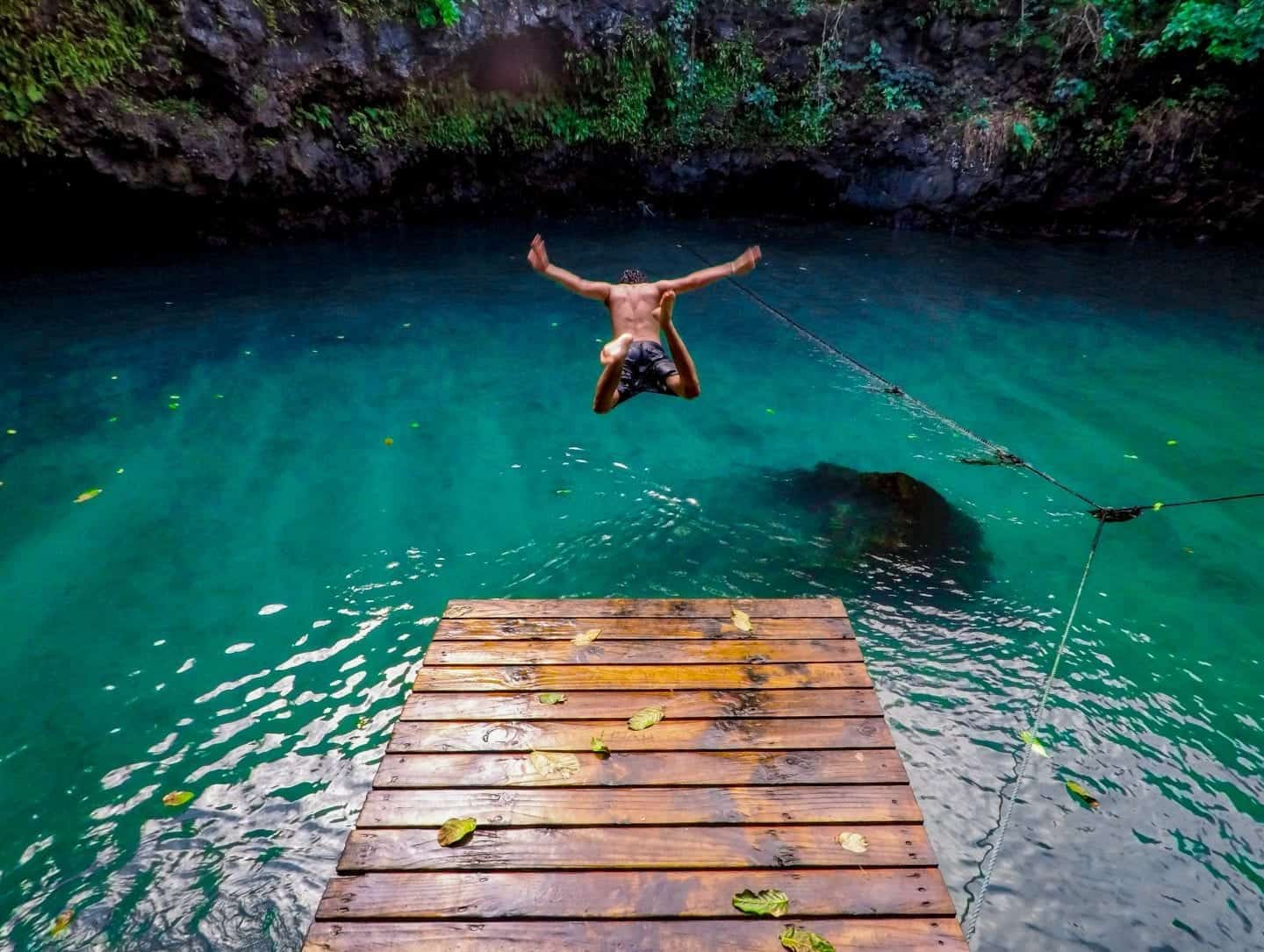 Written by Jessica from How Dare She

Samoa is a gem of the Pacific – the people are as warm, friendly and inviting as the breeze that rolls across the island and through your fale.  Their culture is most remarkable and should not be missed – they don’t just keep it packed up in a box and unpack it to sell to tourists, it’s just the real freaking deal.

I have never felt so respected and taken care of in my travels; one day, a guy saw me waiting to get a taxi, so he offered a ride to where I was going.  He decided that he hadn’t seen the touristy stuff I was headed to, so he decided to drive me around all day.  I insisted that I didn’t want to interrupt his work and he told me that his first concern of the day was to make sure I was taken care of.  He would finish work when he finished work and that’s “the Samoan way.”

Things to do in Samoa

Your eyes and brain are going to be overwhelmed by all the beauty in Samoa.  Slow down and let yourself take it all in.  Even the buses are an “experience”.  There are two islands and with a ferry running between them multiple times a day for $6 USD ($12 WST), you have no excuse to skip Savai’i.  The two islands are surprisingly different, but what they share is incredible topographical variety and no shortage of things to do and see.   All of the land is owned by families and makes up countless villages, so “attractions” often belong to the village.  Most are $5-$10 USD ($10-$20 WST). 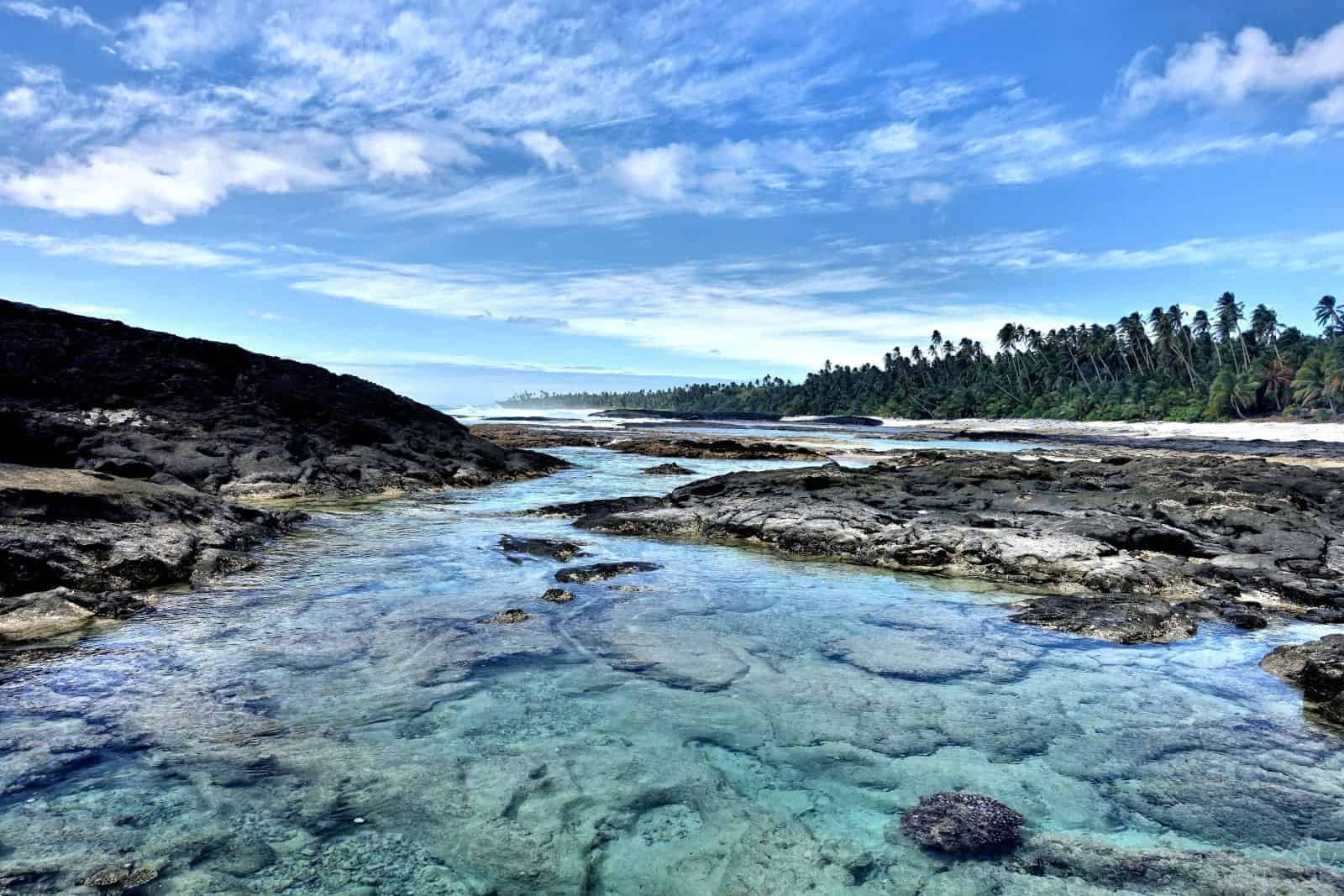 Savai’I is the “big island”, but it is the only host to a small portion of the population.  If you rented a car, you could get around the whole island in a day, but I like to get to know the locals, so I say slow it down and take the buses or hitchhike.

Swimming with turtles was $3.50 USD and pretty neat.  The family feeds them papaya and they can’t get enough of it.  Don’t wear a swimsuit that has orange in it though – unless you want to get mistaken for papaya.  You are also likely to see turtles from the shore, so this is skippable. 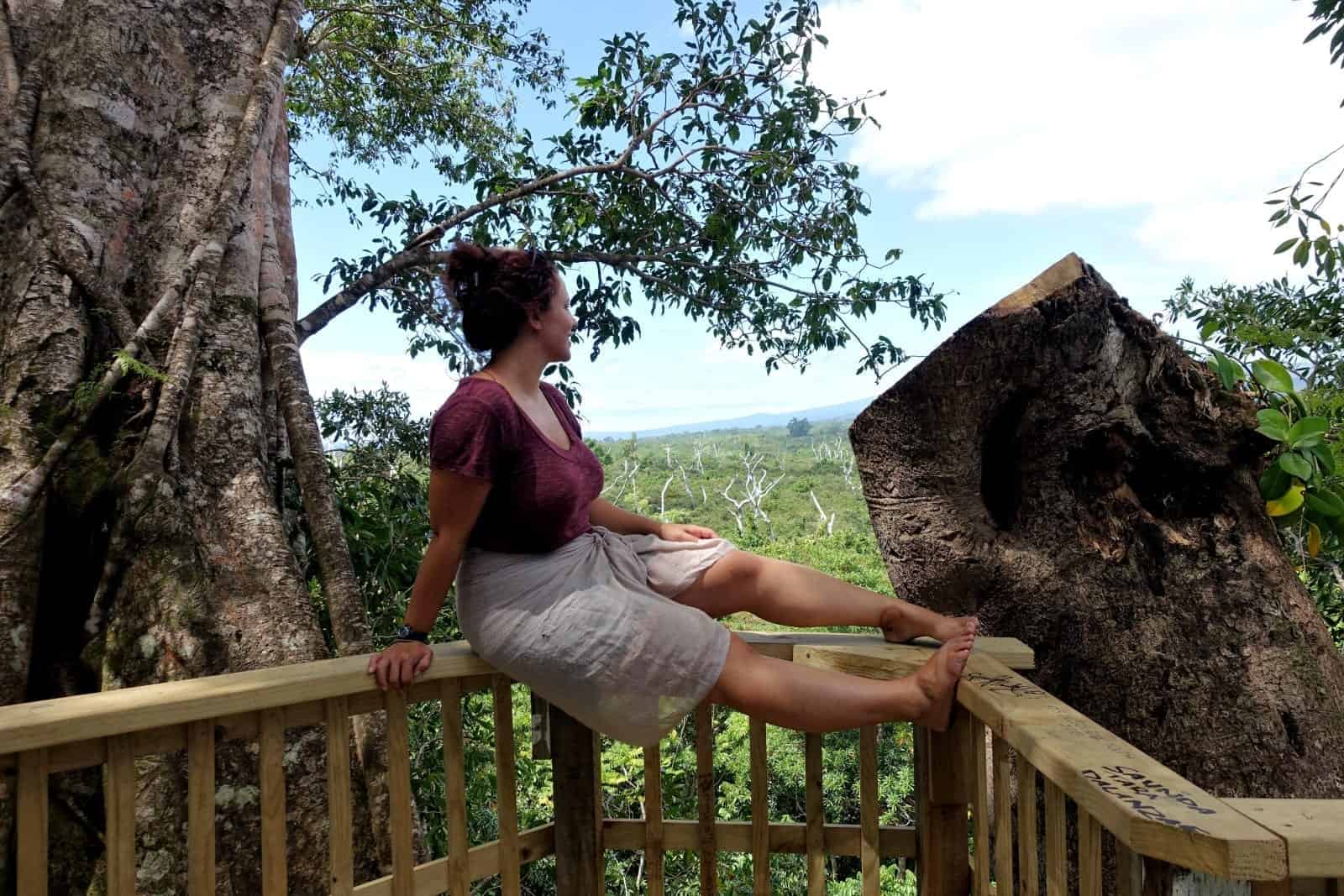 The Falealupo canopy walkway is an oddly-placed walkway that leads you into a really awesome, old tree, with a platform view that shouldn’t be missed.

The Dwarf’s Cave is really cool and an easy cave experience.  The hike up is long (and hot), so if you have a rental car at this point, you’ll be pretty happy.  The Alofaaga Blowholes are remarkable – an entire shore full of blowholes bursting. Go at high tide for the biggest spouts.  Wash the salt water off at the Afu Aau Waterfalls, a quick drive east.

Oh, and there are beaches and cliffs, half-covered with lava, everywhere.  Keep the camera ready.

Go to the Samoan Cultural Village for a day.  I avoid touristy things like the plague, but this is totally worth it.  There were Samoans there and they were excited about how much they were learning. And it’s FREE.  You get a chance to learn about and see so much of Samoan culture.  You will get to practice weaving, learn about, see and EAT the traditional staples, see a good amount of cultural dancing, watch tapas be made, and check out the Samoan tatua (how tattoos were invented).

If you’re into literature and/or history, the Robert Louis Stevenson Museum and surrounding grounds are a pretty cool way to spend a few hours.  You’ll have no trouble seeing why he never wanted to leave Samoa. 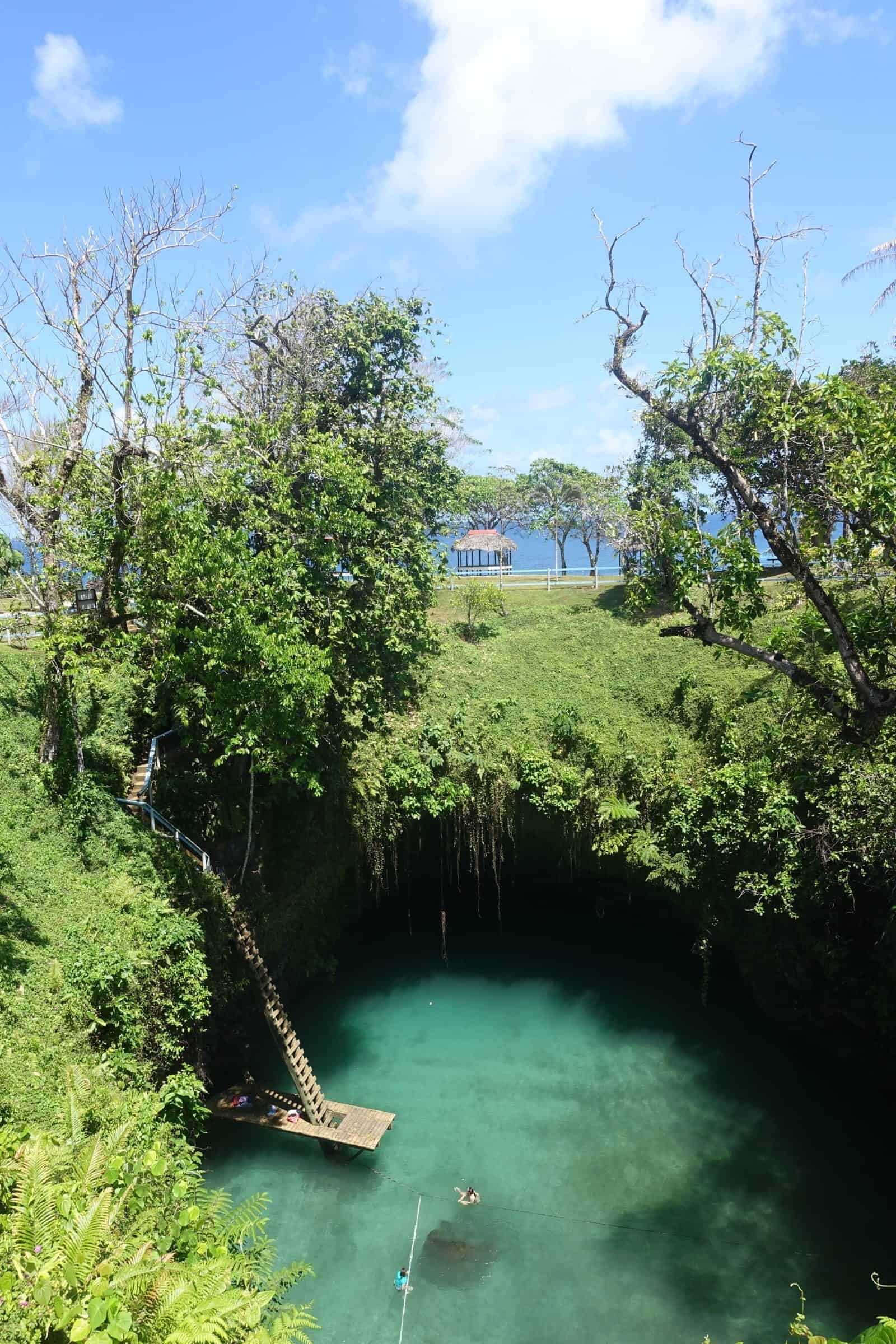 I mean, just wow.  This place is jaw-droppingly beautiful.  The ocean trench is an incredible experience.  The ladder is steep, so dropping in is scary, but what a serene way to spend the day!

At first you’re going to think I’ve led you astray – it starts out pretty murky and underwhelming, but once you hit the shelf, it’s a wow in every direction.   I’m not going to say it’s better than the Great Barrier Reef, but I will say that the overall experience was better, for me (I was out swimming by myself, no one else in the water.   And I didn’t get stung by a jelly).

One of the amazing things about Samoa is the food.  Simple, but delicious. At most of the accommodation, breakfast and dinner are included.  This will likely include some of the Samoan staples: papaya, bananas, breadfruit, taro, and I hope for your sake palusami.  Seriously, eat as much palusami as you can get your hands on – taro leaves with coconut cream baked to perfection.

BBQ is available at stands on the side of the road basically everywhere.  Ask your accommodation for their favourite and you can’t go wrong. 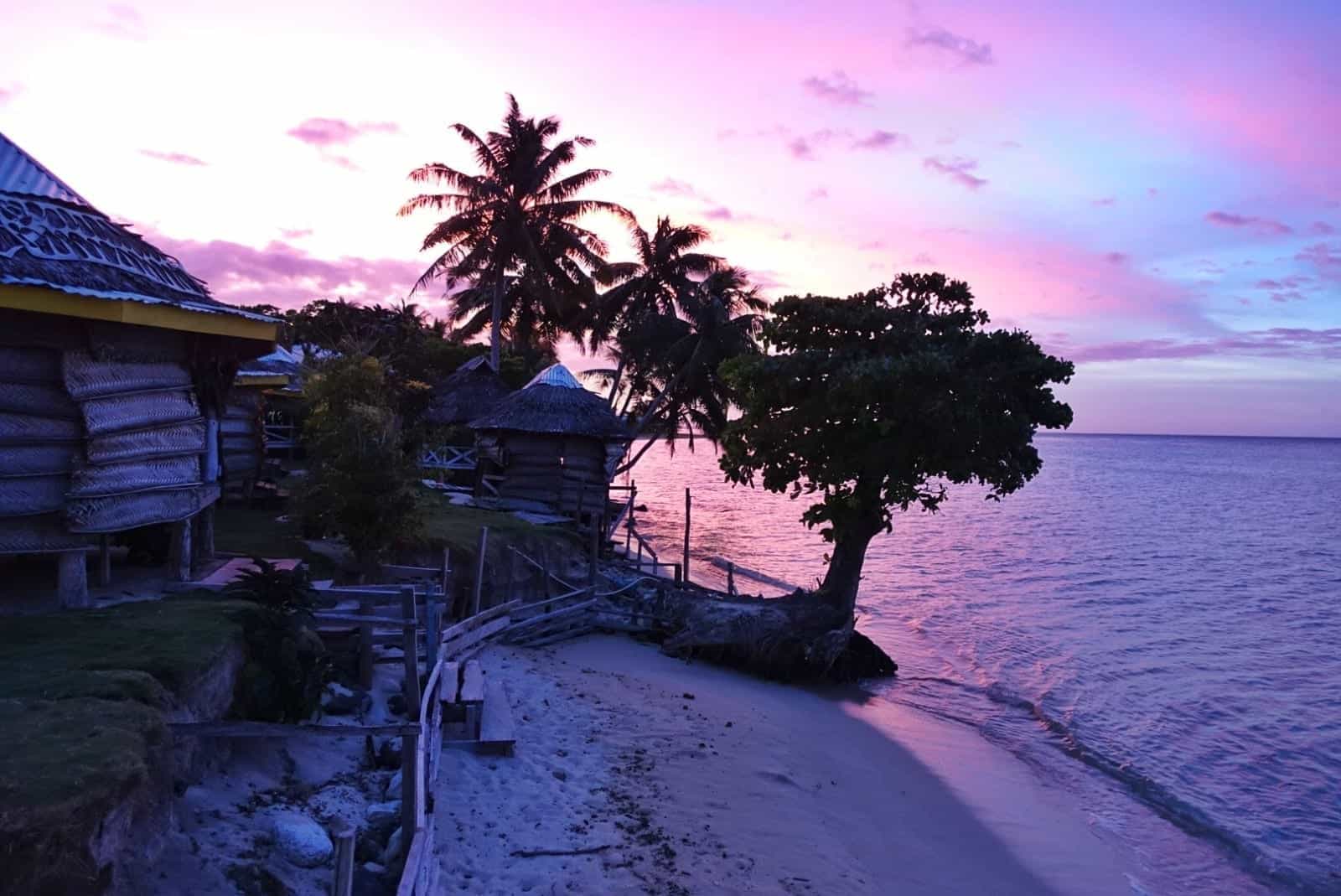 In Savai’i, the best places to stay in is Beach Fales.  They are basically all $35 USD ($70 WST) per night, but they include breakfast and dinner (and we’re talking actual, good, meals, not just toast and coffee).  You’ll be in a little hut with panels that drop down and water that crawls up to your steps.

check out a beach fale here

What not to do in Samoa

1. The visitor center is, actually, legit

I know, visitors’ centers – ugh, right? But the aforementioned Samoan hospitality means that you will actually get helpful, useful information without feeling like it’s being “sold” to you.  There are two locations – one at the airport and one in the city, conveniently located next to the cultural village.  Ask for Shalom. She rocks.

With the country as close to 100% religious as you can get, Sundays are pretty slow. Unlike other Pacific islands, some stores are open and services are available, but the buses are few and far between.  Plan your Sunday on Saturday.  For the same reasons, women should have a lava lava (sarong) to be sure to cover up those knees.

3. Women are considered equally eligible to earn the title of a chief in their villages.

Chief titles are earned through service and contribution, not through arbitrary standards (like firstborn son). Women are totally respected and you can feel it.

Author:  I’m Jessica and I’ve been on the road since April 2015 with 18 countries under my belt. I’ll finish the year at 43 and am after getting some dirt on my shoes from every single one of them.  I love showing that women can and should travel, even if alone, and really getting out there by daring to do, see, taste, experience, and play all over the world.  Check out my website here!

How to Pack All Your Stuff In Your Hand Luggage

Proof That A Cruise Is Now A Super Affordable Holiday Alternative